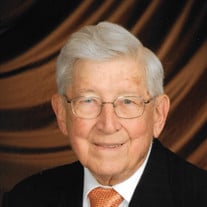 Traverse City - Donald Sheldon Pratt, 92, of Traverse City passed away Sunday, December 11, 2016, at Grand Traverse Pavilions in Traverse City. Don was born on Friday, January 4, 1924, to the late Gilbert and Mary (Buhro) Pratt, in Racine, WI. The family later moved to Traverse City, where Don attended local schools, graduating from Central High School in 1941. After WWII he continued his education at Iowa State University in Ames, where he earned his bachelors degree. In later years he furthered his education at Michigan State University, earning a Master's Degree. While in high school, Don played flute in the band, where he met another flutist, Helen Hughart. They became close friends and eventually married on June 10, 1946, at Central United Methodist Church. Don served our country as a member of the U. S. Army. He served during WW II and when discharged, joined the Army reserves. A short time later Don reenlisted for another three years. Don was extremely proud of our country and in recent years, was a member of the American Legion and served with the Military Honors Group, providing those honors at many funeral services. Don's career, as a ceramic engineer, took his family to several areas of the country to live. Don and Helen retired when they lived in Birmingham, Michigan, and in 1988 they moved back to Traverse City. At that time he renewed his membership at Central United Methodist Church where he has been an active member. Don was a member of the St. Joseph Valley Lodge #4 F & AM in Niles, Michigan, and the Grand Traverse Area Genealogical Society, Don served on the Traverse Area Library Board and was its president during the time of securing the property and building the new facility on Woodmere. He, along with others, worked tirelessly to bring that dream to fruition. Helen and Don shared a passion for working on family genealogy. They spent many hours researching as well as visiting areas where their families had ancestral roots. They also spent many hours physically researching and visually surveying Oakwood Cemetery so that records would be correct. Their other shared interest was ballroom dancing. Over many years they took lessons and became very proficient. At their 70th wedding anniversary, in June, they thrilled those in attendance with their skill and grace on the dance floor. Don is survived by his wife Helen; sons, Bruce (Trish) of Columbus, NC, Kenneth (Kathryn) of St. Louis, MO; grandchildren, Alexander Pratt of Philadelphia, PA, Kristin Serafini of St. Louis, MO, Katie (Paul) Rooprai of Louisville, KY, Kevin (Katherine) Pratt of Seattle, WA, Alison (Chad) Reid of Paso Robles, CA, Catherine (David) Wallace of St. Louis, MO, and his great grandchildren, Pierson and Marin Rooprai. Don is also survived by his brother, Allan (Ellen) Pratt of Tempe, AZ. Don was preceded in death by his daughter, Mary Cecile Wiegand. A Memorial Service, celebrating Don's life, is being planned for the spring of 2017 at Central United Methodist Church. Interment will be in Oakwood Cemetery at a later time. Rather than flowers, contributions, honoring Don's memory, may be directed to Central United Methodist Church (Via mail: Central UMC, 222 Cass Street, Traverse City, MI 49684. Or, online donations: http://www.tccentralumc.org/giving/). Please share your memories of Don with his family by visiting www.reynolds-jonkhoff.com. The family is being cared for by Reynolds-Jonkhoff Funeral Home.

The family of Donald Sheldon Pratt created this Life Tributes page to make it easy to share your memories.