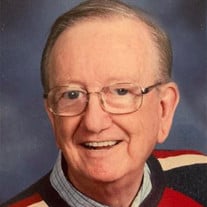 Donald Lee Springstead, 79, of Traverse City, was greeted by his Heavenly Father on Saturday, November 16, 2019. Don was born on May 6, 1940 in Muskegon Michigan to the late Aaron and Ethel (Morin) Springstead. Don married the love of his life, Diane A. Walker on May 9, 1958. She preceded him in death on August 8, 2005. Since 1966, Don and Diane owned and operated Kopy Sales, Inc., until his retirement. He was very proud of the fact that the business is still faithfully family owned. Together, they raised three children who were the subjects of their pride, love, and joy. They were committed to their Savior, family, their faith, and their church, East Bay Calvary. Don leaves behind him a rich legacy of love. He is survived by a son and a daughter; Brian D. (Sally) Springstead and Angela K. (Raymond) Lyon. His loving grandchildren; Megan (Brandon), Luke (Joy), Mary, Morgan, Sarah (Kelley), Jason (Lindsey) and Stephanie (Jeff) and great-grandchildren; Avery, Ethan, Sydney, Collin, Kuiper, Dekker and Austin. Also surviving are a former son-in-law, Donald Newton, a brother, Douglas Springstead and a sister-in-law, Lois Springstead. He was also preceded in death by a daughter; Terri D. Newton, a sister; Elaine Cowan and four brothers; Jerry Springstead, Keith Springstead, Aaron Springstead and Kenny Springstead. As a family, The Springstead’s enjoyed countless “Sunday dinners”, holidays filled with uproarious laughter, times in the woods of East Bay township mushroom hunting, and all that the beauty of Northern Michigan offers. Don loved sports of all kinds. He was an avid Lions & Tigers fan, and as a hockey player himself, he was particularly partial to the Red Wings. He was an excellent referee; he officiated many games throughout Northern Michigan. He loved to be outside hunting, fishing and playing golf. He will be remembered for his quick wit and wonderful sense of humor. Don’s faith was the center of his life, he was a very active member of East Bay Calvary Church. He joined the deacon board at East Bay Calvary, loved to sing in the choir and became a trusted member of the congregation and a Sunday school teacher. Don was a servant. Don not only served his Savior and his church, but he served his wife, Diane, through her challenges with Multiple Sclerosis and breast cancer. He served his family and planned and provided wisely for them. He served his customers and always was a man of his word. How do you sum up a lifetime of serving, faith, wisdom, humor, and love? You can’t possibly do it in a few paragraphs for a newspaper submission. But you can say that Don lived each of those things to his fullest each day. He will be missed greatly, and was welcomed warmly in his home in eternity, where surely His Savior proclaimed, “Well done, my good and faithful servant”. A funeral service will be held this Saturday, November 23, 2019 at East Bay Calvary Church, 2225 E. Hammond Rd, Traverse City, MI 49696. Family may be greeted during an open visitation in the church foyer from 10:00 am until 12:00 noon, at which time the funeral will begin. Pastor Sheldon Reist will officiate. A luncheon will follow in the lower level of the church. Private family burial will be in Acme Township Cemetery. Please feel free to share your thoughts and memories with Don’s family at his tribute page at www.reynolds-jonkhoff.com. The family is being cared for by the Reynolds-Jonkhoff Funeral Home and Cremation Services.

Donald Lee Springstead, 79, of Traverse City, was greeted by his Heavenly Father on Saturday, November 16, 2019. Don was born on May 6, 1940 in Muskegon Michigan to the late Aaron and Ethel (Morin) Springstead. Don married the love of his life,... View Obituary & Service Information

The family of Donald Lee Springstead created this Life Tributes page to make it easy to share your memories.

Donald Lee Springstead, 79, of Traverse City, was greeted by...