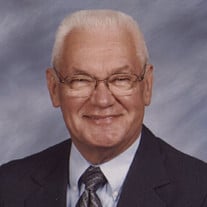 Traverse City - Donald Edwin Waisanen, 79, of Traverse City, passed away peacefully on May 20, 2014 at Bortz Health Care of Traverse. Donald was born in Detroit Michigan on June 5th, 1934 to the late Edwin and Martha (Lakso) Waisanen. He married Phyllis Barbara Jacobson in Detroit, Michigan on January 26th, 1957 and the couple together raised four children. Donald attended the University of Michigan and Wayne State University where he earned his Bachelor’s Degree in Business Administration with a major in Accounting. He became a Certified Public Accountant and after working downstate for many years, he and Phyllis moved permanently to Traverse City in 1973 and Don opened his own CPA practice. Donald was involved in many community and social organizations including Kiwanis Noon Club, the TC Elks Club, the Osteopathic Hospital Board, the Emmaus Community of Traverse City, and was a member of Bethlehem Lutheran Church and then the First Congregational Church. He was active in the Amway business and he and Phyllis took many great trips associated with this business and with the Kiwanis club. Donald enjoyed bowling at the old Timberlanes in Traverse City, playing golf whenever he could and singing in the choir at Bethlehem Lutheran Church. He was also very active in the lives of his children taking them to church potlucks, Boy Scout meetings, Indian guide functions and providing support and transportation to his son Dennis during his years of illness in the early 1990’s. He also became a full-time caregiver to his mother-in-law until her death from cancer in 1990. Donald was a loving husband, father, and grandfather and will be greatly missed by his family and those whom he knew and served in this community. We take comfort in knowing that Don is with his Savior now and is relieved from his earthly existence with Alzheimer’s disease. Donald is survived by his wife Phyllis, and their four children; daughter, Lynne (Craig) McClure of Waterford; sons, Dennis (Cheryl) Waisanen of Traverse City, Kenneth Waisanen and Glenn Waisanen, both of Waterford. 5 grandchildren, Bryan (Heather) McClure of Waterford, Caitlin McClure (fiancée Ted Clark) of Warren, Devin McClure of Waterford, Sara (Colin) Waisanen Smith of Traverse City, Michael (Allie) Waisanen of Whitmore Lake. Donald also has two great-grandchildren, Madison and Matthew Smith of Traverse City. He also leaves behind his beloved miniature schnauzer, Radar. He is preceded in death by his parents, and his sister, Janet Pohl. The Waisanen family would like to graciously thank the staff of Bortz Health Care of Traverse for their love and support of Donald and Phyllis over the last six years. He loved his caregivers and they gave him so much joy in the early years of his illness. The family would also like to express their sincere thanks to the Hospice of Michigan nurses who have provided wonderful care for the family over the past week at Bortz. A memorial service will be held at 1:00PM on Saturday August 2, 2014 at the First Congregational Church in Traverse City with Pastor Garu Hogue officiating. In lieu of flowers, the family has asked that donations be made to one of the following causes with envelopes available at the funeral home; Alzheimer’s Research, Hospice of Michigan, or Bortz Heath Care of Traverse. Please feel free to share your thoughts and memories with Donald's family by visiting www.reynolds-jonkhoff.com Arrangements for the family have been entrusted to Reynolds-Jonkhoff Funeral Home and Cremation Services.

Traverse City - Donald Edwin Waisanen, 79, of Traverse City, passed away peacefully on May 20, 2014 at Bortz Health Care of Traverse. Donald was born in Detroit Michigan on June 5th, 1934 to the late Edwin and Martha (Lakso) Waisanen. He married... View Obituary & Service Information

The family of Donald Edwin Waisanen created this Life Tributes page to make it easy to share your memories.