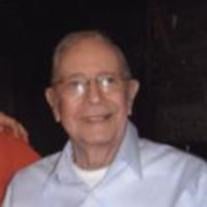 Lake Ann - Donald Ray Wright, 88, of Lake Ann passed away September 15, 2012 at his home. Don was born on May 7, 1924 in Alma to the late Ray and Retha (Leonard) Wright. Don was honorably discharged as a Corporal of the United States Marines after serving from 1942 to 1945 in World War II. On October 23, 1948 Don married the former Lucille Schutt in Bay City. Don was a plastics research and design engineer for Dow Chemical and retired after 40 years of faithful service. In his spare time, Don enjoyed hunting, skiing, and fishing. He also liked to invent things and had 52 patents. He invented the first salt spreaders for Dow Chemical. He also invented spiral generation. This process makes round houses or structures as seen on the Park Place Dome and his home. Don was a member of the American Legion and the Redeemer Lutheran Church in Interlochen. Don is survived by his wife of nearly 64 years, Lucille, son Dr. Kim (Colleen) Wright, daughter-in-law Carole Wright, granddaughters Crystal (Lieutenant Matthew) Fetzner, Alexis, Brianna, grandson Nicholas and granddaughter Robyn (Marcus) Mead, great grandchildren Riley and Keira Fetzner, Meredith, Madelyn, and Wesley Mead, sisters Louise Whitson and Delores Franke and many nieces and nephews. Don was preceded in death by his parents, son Robert and infant son. The funeral honoring Don's life will take place on Wednesday, September 19, 2012 at 11:00 am with visitation held one hour prior at the Interlochen Redeemer Lutheran Church. Burial will follow at Greenbriar Cemetery where he will receive full military honors from the VFW Cherryland Post #2780. Memorial contributions in memory of Don may be directed to Hospice of Michigan which provided he and the family with excellent care over the past year or to the Redeemer Lutheran Church. Please visit www.reynolds-jonkhoff.com to share your thoughts and memories with the family. The family is being served by the Reynolds Jonkhoff Funeral Home

Lake Ann - Donald Ray Wright, 88, of Lake Ann passed away September 15, 2012 at his home. Don was born on May 7, 1924 in Alma to the late Ray and Retha (Leonard) Wright. Don was honorably discharged as a Corporal of the United States Marines... View Obituary & Service Information

The family of Donald Ray Wright created this Life Tributes page to make it easy to share your memories.