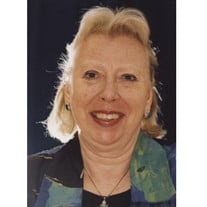 Donna L. Brunsma INTERLOCHEN – Donna Louise Brunsma, age 85, of Interlochen, passed away Saturday, September 16, 2017 at her home surrounded by her dear friend, Karen. Donna was born to Herbert and Marjorie (Nelson) Brunsma on June 3, 1932 in Beech Grove, IN. Donna Brunsma began her musical training in America. A graduate of the Eastman School of Music, she continued her studies at the Juilliard School of Music and The School of Sacred Music at the Union Theological Seminary in New York City. She later studied in both France and Italy. For many years she was a coach-accompanist in New York City, as well as organist-choirmaster in several Episcopal churches. She participated in the preparation of the initial season of the Metropolitan Opera National Company under the direction of Rise Stevens. Ms. Brunsma continued to work and teach in both Italy and the U.S. Since 1997 she has been a vocal coach for the “Opera Theatre of Lucca”, a summer program in Italy sponsored by the University of Cincinnati. In 1998 she was musical collaborator on the new CD recording of Gian Carlo Menotti’s “The Consul” which was recorded live at the Spoleto Festival. In the fall of 1999 she returned to Chicago for five weeks at the Lyric Opera, and also to prepare a concert of sacred music by opera composers for the Cathedral of St. James. Vocal coach and accompanist Donna Brunsma is renowned for her work with many of today’s international opera stars. She joined the staff of the Lyric Opera of Chicago in 1978, and as an assistant conductor performed a wide variety of musical duties, including: musical coach for the Lyric Opera Center for American Artists, chorus master for the Children’s Chorus, prompter, supplementary chorus preparation, chorus master for Hugo Weisgall’s “Six Characters in Search of an Author” (released on CD by New World Records), lecturer for the Lyric’s Education Department, Chapters and Boards. In Chicago she was also Director of Music at the National Shrine of St. Frances Xavier Cabrini where she organized the concert series “Music in the Shrine”. In 1998 she produced a CD, “Christmas in the Shrine”. In Europe Ms. Brunsma has been an assistant conductor for the Maggio Musicale Fiorentino in Florence, the Accademia Chigiana in Siena, The Festival of Two Worlds in Spoleto, and the Teatro Sao Carlos Lisbon. She has also been chef du chant at the Theatre Royal de la Monnaie in Brussels, and a member of the faculty at the American Institute of Musical Studies in Graz, Austria and in Italy at the Bel Canto Seminar in Busseto with Carlo Bergonzi, and the Villa Schifanoia Graduate School of Fine Arts in Florence, where she directed a Madrigaletto as well as collaborating with Tito Gobbi and Giulietta Simoniato in their summer workshops. As organist-choirmaster of St. Mark’s English Church in Florence, she organized a citywide/international chorus that performed in many churches in Florence and surrounding Tuscan towns. She has performed extensively as an organ recitalist, especially on the historic organs in Tuscany. She has collaborated in master classes with Renata Scotto, Regine Crspin, Alfredo Kraus, Luciano Pavarotti, Tito Gobbi, Gino Bechi, Giulietta Simoniato, Carlo Bergonzi, Paolo Montarsolo, and Hakan Hagegard. Private coaching includes some of the world’s greatest singers: Salvatore Baccalni, Jerome Hines, Richard Tucker, William Warfield, Mirella Freni, Nicolai Ghiaurov, Leyla Gencer, Piero Cappuccilli, Ruggiero Raimondi, Katia Ricciarelli, Jose Carreras, Samuel Ramey, Renee Fleming, Catherine Malfitano, Rockwell Blake, Felicity Lott, Dimitri Hvorostovsky, and Sergei Leiferkuss. Throughout her career she has maintained a relationship with the Interlochen Center for the Arts; first as a camper, then as staff accompanist and guest faculty, returning to the roots of her musical inspiration. A Mass of Christian Burial will be held at 11:00 am on Monday, September 25, 2017 at Immaculate Conception Catholic Church with a visitation one hour prior. Fr. Anthony Citro will officiate.

The family of Donna Louise Brunsma created this Life Tributes page to make it easy to share your memories.