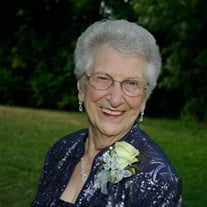 Doris M. Fowler, 100, lifetime resident of Traverse City, passed away August 9, 2021 spunky and full of spice until the end. Doris was born September 6, 1920 to the late Jerry and Maggie (Mote) Skiver in the same house she occupied her whole life except a few years she resided in Detroit. Even though a full-time mother of six children and widowed at 54, she took the world by storm. She was gainfully employed at Kresges downtown Traverse and then at K-Mart, retiring at 65. Boredom set in 5 years later so she went to work at Potters Bakery where she was a favored coffee and donut seller, making many friends. she re-retired at age 90 from there. Doris loved playing card games and considered herself to be quite the card shark. Her drink of choice was Bud Lite, cold and free was her preference. She was always ready to raise her glass to someone. She would amaze you with her skills at knitting and sewing, loved the Detroit sports teams, especially the Tigers and Pistons, and was a fan of Vince Gill. One of her greatest thrills was being sung a song by Vince dedicated to her and being hugged by him at a concert. Doris is survived by her daughters Sandy (Jerry) Reese, Susan (Wes) Sanford, Cindy (John) Waddell, and Peggy (Glen) Ridgway, 20 Grandchildren, at least triple that in Great Grandchildren, nieces, nephews, cousins and friends galore. After all, being 100 provides you quite the group of all. She is preceded in death and now joins her husband, parents, daughter Dorene Lorezca, son Forest Fowler, brothers Ralph, Garry, Kenneth and Forest, her sisters Clara, Helen, Irene and Margaret, and many furry four-legged companions over the years. Visitation will take place Friday August 20, 2021 from 5-7pm at the Reynolds Jonkhoff Funeral Home. A funeral service will take place on Saturday August 21, 2021 also at the funeral home at 11:00am with visitation from 10:00am until the beginning of service. Doris will be laid to rest next to Harry at Oakwood Cemetery. Please visit www.reynolds-jonkhoff.com to share your memories with the family. Those wishing to express sympathy may choose to make a contribution to Munson Medical Center Auxiliary in her honor. Doris and her family are being cared for by Reynolds-Jonkhoff Funeral Home.

Doris M. Fowler, 100, lifetime resident of Traverse City, passed away August 9, 2021 spunky and full of spice until the end. Doris was born September 6, 1920 to the late Jerry and Maggie (Mote) Skiver in the same house she occupied her whole... View Obituary & Service Information

The family of Doris M. Fowler created this Life Tributes page to make it easy to share your memories.