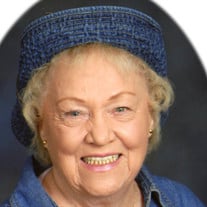 Doris Martha Olsen (Bine) Hetmanski, better known as “Dorie” passed on into her heavenly home, “Safe in the arms of Jesus”, March 28th, 2017. Doris had a full 95 years of life filled with the challenges of the Great Depression, WW II, balancing a modeling career as a wife and mother, and serving the war effort in the Civil Air Patrol and is a certified member of the “Rosie the Riveter” Sorority. Later she became a key-punch operator, professional clown, and so much more to those around her. Her purpose in life was to love others, glorify Jesus as a powerful “Prayer Warrior”, and try to make at least five people laugh each day. Doris is survived by her brother David A. Olsen of Platte City, MO.; her two daughters Patricia Ann Thoms of Bloomfield Hills, MI and Carol Joy Sullivan of Moriarty, NM. Dorie was grandmother (Bestamore) to eight grandchildren: Michael C. Balavich, Patricia “Lynn” Cardiel, Stephen A. Sullivan, Michalene Gallardo, Tara Hodgkins, Amy M. Gallardo, Melisa K. Gilbreath, and David J. Sullivan. Doris was Great Grandmother to ten and Great Great Grandmother to Noah Stewart , whom she called her “little King”. Any donation in her honor should be sent to: Bayview Wesleyan Church; 720 Wayne Street, Traverse City, MI 49684. The family is being compassionately cared for by the Reynolds-Jonkhoff Funeral Home and Cremation Services.

The family of Doris Hetmanski created this Life Tributes page to make it easy to share your memories.