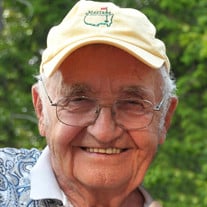 Dorlen Francis Groleau “Lefty,” 91, gently passed away October 11, 2021. Dorlen was born April 8th 1930, in Nahma Michigan, on a warm spring day, the beloved child of Albert and Lucille (Clement) Groleau. He was the middle son in a family of 6, happily growing up with Joyce, Duane, Zenita, Idalyn and Roddy on his father’s cherry farm in Williamsburg Michigan. He graduated from Williamsburg High School in 1949. Dorlen loved people, and people loved him back. Everywhere he went, he talked to anyone he met, really getting to know them, and helping anyone in need. He remembered everyone’s name and usually the names of their family members too. He was a hugger, smiler, and genuinely caring guy. Dorlen was an exceptional athlete who excelled in multiple sports, especially baseball. He holds his high school’s record for the most points scored in a single basketball game, scoring 54 points, (long before 3-point baskets). Dorlen was the left-handed star pitcher on the Williamsburg High baseball team all 4 years, losing only 4 games his entire high school career. The highlight of his high school pitching experience was a no-hit double header in his senior year. He went on from high school to pitch in the Chicago Cubs farm system until he married and the need to earn some ‘real’ money to support his family forced him to end his ‘professional’ baseball aspirations. He didn’t give up the game though, he continued to play tournament ball well into his 40’s, leading his teams for many winning seasons. Dorlen loved his friends and his sports, but his biggest loves were his family. He married the former Joanne LaLone in 1949 and they raised 5 children together, Brent, Ralph, Ann Jeannine, Marty and Chris. In 1977, he married the former Betty Ann Jarmer Ferris. He lovingly welcomed Betty’s 4 children, Scott, Kelly, Kevin and Craig Ferris into the family. Dorlen and Betty enjoyed all types of activities including cards, board games, mall walking, golfing and seeing the world. They traveled to every state in the continental United States, making lasting memories and friends at every stop. Dorlen is survived and is dearly missed by his sisters Joyce Lundberg, Zenita Buckel and brother Rod Groleau; children, Brent (Pat) Groleau, Ralph (Tina) Groleau, Ann Jeannine (Tony) Trotter, Scot (Jill) Ferris, Kelisue (Mick Southwell) Stachon, Kevin Ferris, and Craig Ferris; grandchildren, Kirt, Keri, Rick, Aimee, Ava, Andrew, Ryan, Dayton, Jim, Daniel, Sam, Sara, Amanda, Jason, Craig, Sean and many great grandchildren, nieces, and nephews. Preceding him in death are his parents; his wife Betty Ann; his ex-wife Joanne; his brother Duane and sister Idalyn; his sons Marty and Chris and son-in-law Dale Stachon. A memorial service will be held Sat., Oct. 16, 3:00 PM at Reynolds-Jonkhoff Funeral Home, visitation one hour prior to the service. A graveside service honoring Betty and Dorlen will take place Mon., Oct., 18, 10:00 AM, in Traverse City’s Oakwood Cemetery. Please share memories and condolences on Dorlen’s tribute page at www.reynolds-jonkhoff.com

The family of Dorlen Francis Groleau created this Life Tributes page to make it easy to share your memories.