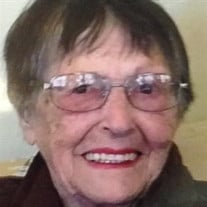 Dorothy Marie Bauer Elliott was born June 13, 1927 and left us on February 26, 2017. Mom grew up on a farm in Hannah as the oldest of five children. Her brothers and sisters survive her. After graduating from St. Mary's Hannah, she went to Western Union School and worked there during World War II. In 1947 she married Max and they celebrated 68 years of marriage before dad died in 2015. All who knew Dot know she was more than just a pretty face...more Elizabeth Warren than your average country girl! She persisted. Upon hearing of her death, the most frequent comment has been, "What a gal!", followed by "What a legacy!" Mom and dad had seven children and mom was CEO of the family. She instilled an expectation of a college education and self-sufficiency in her three daughters and four sons. Dorothy grew, preserved and fed her family FULL time. She was an avid reader and news and sports-watcher. She would talk back to the Today Show or Nightly News when she thought they needed to be "straightened out"! Mom was a great manager, baker, master multi-tasker, and do-it-yourselfer. She once reupholstered the sofa and then made herself a dress to match, thinking she could hide for a moment's peace! Mom and dad were active in whatever their kids were doing. They built Cherry Festival floats, worked PTA carnivals, and ran ski races at Hickory Hills. Mom became quite a skier herself once the kids were grown. In the 1970s mom became a volunteer at the TC Junior High Library. That led to a job at the Traverse City Public Library until her retirement. Mom and dad loved a good card game; they danced, and were blessed with many friends. Dorothy continued playing cards and making new friends at her Boardman Lake Glens home. In earlier years, the family went camping. We didn't often go far, but mom made all trips educational. We never passed a museum or landmark without stopping. As retirees, mom and dad traveled the USA in their motor home and had wonderful adventures abroad with friends. Dorothy is survived by her children Roxanne (Dave) Reschke, Susan (John, deceased) McGarry, Gene/Hop (Conni), Janice (Bruce) Shugart, Joseph (Sheryl), Daniel (Mary Jo), and Jon (Sue), ten grandchildren and four great-grandchildren. There were many who joined the our family along the way - friends of hers, mom and dad's friends, the kids' cohorts. The back porch and the back table at Elmwood were always lively places. There's a longstanding competition among some of the kids' friends to be named the #8 child. Wisely, mom never officially bestowed that title, but cleverly led them all along for years. Dorothy's children were fortunate to grow up in an environment where there was always room at the table. There was a bounty of food and conversation, with room for many and varied opinions, Dorothy's included! Mom encouraged independent thinking and raised strong children. It was a true point of pride to mom that her seven children all had college degrees - and no divorces. Job well done, mom. Hoping there are quiz shows and card games where she is now. Her Euchre partner is dad. Those two will skunk all competitors and celebrate their 70th anniversary together. There will be a private family service. Dorothy's children thank the wonderful staff at Boardman Lake Glens for giving mom a special home and loving care. Memorial contributions to honor Dorothy can be made to either of the following charities: Preserve Hickory Hills Municipal Ski Area where a fund is established by the Max and Dorothy Elliott Family (233 N. Madison, Traverse City, MI 49684) St. Mary's Hannah Church/Window Restoration Fund (2912 W. M113, Kingsley, MI 49649)

Dorothy Marie Bauer Elliott was born June 13, 1927 and left us on February 26, 2017. Mom grew up on a farm in Hannah as the oldest of five children. Her brothers and sisters survive her. After graduating from St. Mary's Hannah, she went to Western... View Obituary & Service Information

The family of Dorothy Marie Elliott created this Life Tributes page to make it easy to share your memories.