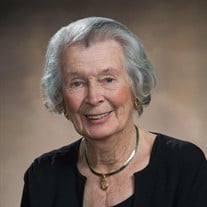 Dorothy Canterbury Wilhelm French, 95 of Traverse City, passed away suddenly from cardiac arrest at Evergreen Cottage at the Pavilions. Born July 3, 1925, to George William and Grace Edna (Canterbury) Wilhelm in Traverse City, Dorothy was the second of their four children. She was proud to be the granddaughter of area pioneer, Anthony J. Wilhelm, who came to Traverse City as a child with his parents from Prague, Bohemia, and in 1886 founded Wilhelm’s Store on the corner of Union and 8th Street. Dorothy graduated from Traverse City High and was the first local student to receive a scholarship to the University of Michigan from the newly formed U of M Club. She graduated in 1947 with a degree in psychology and received her second degree in Occupational Therapy in 1949. While at the university, she met her future husband, C. Wayne French. On October 15, 1949, they were married at the First Congregational Church in Traverse City. Wayne’s career with US Steel had them relocating about every 5 years in the first 30 years of marriage, often joking that it was time to move when the house needed painting. They lived in Cleveland, Ohio; Yardley, Pennsylvania; Naperville, Illinois; Pittsburgh, Pennsylvania; and twice in Joliet, Illinois. Along the way they had two daughters, Lynn and Sara. Dotty’s career had to take a back seat to Wayne’s, but she had an accomplished career of her own. In each new place she found work as an Occupational Therapist, usually rising to the top position before moving and starting over again. She laughingly remembers teaching an adult education class in toy making, especially marionettes, when she first started out. Her greatest career achievement was obtaining the grant and starting a pre-school program for handicapped children while Director at the Easter Seal Center in Joliet. It provided the children the opportunity to socialize with others of similar abilities and provided a much needed respite of a few hours a week for their parents. For many years afterward, she received Christmas updates on how the children were doing from their families. Among her many volunteer activities, she fondly recalls serving as a tour guide at Heintz Hall for the Performing Arts while in Pittsburgh. In 1981, Wayne retired and they moved to The Homestead in Glen Arbor, where they lived for 20 years before moving to Traverse City. Dotty will be remembered for her kind heart and quick smile, as well as her ability to engage total strangers in conversation, often while in line at the grocery store, much to the chagrin of her teen daughters, but a skill that served Wayne well in various social settings for work. She belonged to many clubs, and enjoyed golf, cross country skiing, and travel, going to cities too numerous to list. Dotty was a talented painter, but will be remembered most for her skill in the kitchen. She loved to cook and served countless wonderful meals. In retirement, she put together a cookbook of her favorite recipes, some handed down from her mother and others that she developed or collected over the years, which she printed and gave to family and friends. Dorothy is survived by her daughters, Lynn (John) Zeiger and Sara (Tom) Shallop; granddaughters, Abbie (Dan) Leino and Leslie (Luke) Hofmeister; an unborn great granddaughter; sisters-in-law Ardis Knarr and Mary Carol Devey; as well as numerous nieces, nephews and cousins; and her beloved cat, Simon. She was preceded in death by her parents, George and Grace Wilhelm; her husband, Wayne French; and siblings, Alice (Jack) Merrill, Anthony “Tony“ (Sally) Wilhelm, George Howard (Peggy) Wilhelm. Visitation will be held on Tuesday, January 19th from 2 to 4 PM at the Reynolds Jonkhoff Funeral Home. Burial at Oakwood Cemetery will be at a later date for family. Memorial contributions in Dorothy’s honor may be directed to the University of Michigan, the Grand Traverse Pavilions, or the Cherryland Humane Society.

The family of Dorothy French created this Life Tributes page to make it easy to share your memories.