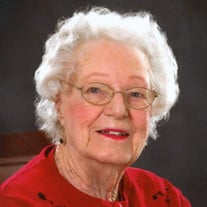 Dorothy Gilbert Kreag-Olson, 106, was born on September 25, 1913 in Manhattan, KS to the late Glenn Arthur and Anna Elwell Gilbert. She and passed away December 4, 2019. In her early years living on the family farm near Moline MI. Dorothy developed work habits and character that defined her life. In Chicago she added, music, art, and tennis (at which she was very good). She earned a Bachelor’s Degree from Michigan State College in 1936. Dorothy taught school in Royal Oak from1936-8 and again in the 1950’s -70’s, for a total of 19 years, primarily kindergarten and 2nd grade. In 1938 she married Keith Kreag, who became the first Education Curator at the Detroit Zoo. In Royal Oak, they raised their 4 children, finding time for many trips and family gatherings as well as tennis, square dancing, bowling, bridge games, and gardening. Dorothy also taught Sunday school at Saint John’s Methodist Church. In retirement they split their time between Alanson MI and Barefoot Bay FL. They also took many trips in the US, Canada, and overseas. In Alanson they helped start and worked on the Hillside Garden. On the first Saturday of each August they hosted a gathering of their extended families. Dorothy's interest in arts and crafts at this time took off again. This was perhaps the happiest period of their lives, with friends and family and more time to pursue their interests. Keith passed away in 1984. In 2001 Dorothy decided to move in to Glen Eagle Independent Retirement Living facility in Traverse City. There she made many new friends, including Herb Olson, whom she married. At Glen Eagle, after Herb died, she stayed active with her art, bridge, and wii bowling. Most mornings she would take time to write stories about her life and observations on life for inclusion on the Glen Eagle monthly calendar. Those left to cherish her memory and legacy include her son John (Joanne) Kreag of Kewadin, son Glenn (Joanne Nesbitt) Kreag of Sebastian, FL, daughter Rebecca (Willa Fox) Kreag of Portland, OR, and daughter Marilyn (William) Holcomb of Broomfield, CO; grandchildren Anne, Keith, Jennifer, Andrew and Christopher; great grandchildren James, Ian, Ebbin, Nala and Tealya. The family will celebrate her life privately in a memorial service in the summer. Memorial contributions may be directed to the Little Traverse Conservancy in Harbor Springs.

Dorothy Gilbert Kreag-Olson, 106, was born on September 25, 1913 in Manhattan, KS to the late Glenn Arthur and Anna Elwell Gilbert. She and passed away December 4, 2019. In her early years living on the family farm near Moline MI. Dorothy... View Obituary & Service Information

The family of Dorothy Gilbert Kreag created this Life Tributes page to make it easy to share your memories.