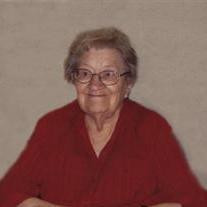 Dorothy Estel Lanham, 97 of Maple City, passed away on Tuesday, November 27, 2012 at Maple Valley Nursing Home with her loving niece, Bunny Lanham, at her side. Dorothy was born in Boone County, Indiana on October 24, 1915 to John and Mary Agnes (Hawk) Lanham. She was the oldest of 8 children, Fred, Herbert, Ester, Carl, Evelyn, John and Margaret. In 1917 her family moved from Indiana to the Grand Traverse area to be near her fathers parents. They moved several times before settling in Burdickville area. During her teenage years she worked at the Leelanau Schools. After graduating from Maple City High School, she moved to Manitowac, WI where she attended college and lived with the Mautz Family. Then she went to the Chicago Art Institute and furthered her education. Her career began at Rand McNally as a cartographer. During WWII she worked on war maps for the military. After the war she was transferred to the non- fiction department where she remained for many years. In 1958 she built a home in Burdickville and the Glen Lake Workshop, now known as the Burdickville Market. She enjoyed Petoskey Stone hunting along the Lake Michigan Shore and teaching young people how to polish our beautiful State stone at her workshop. Also, she specialized in original artwork, pottery, lapidary and publications during the summer months. During that time she wrote The Petoskey Story, which is still in print today. She continued to work at Rand McNally Company during the winter months. Upon retiring she moved to a nearby house in the woods where she enjoyed the peace and quiet. There she continued a limited amount of work as well as genealogy and volunteering. She worked with the Empire Heritage Group, the Old Settlers Assoication and the Commission on Aging Lunch Program in Empire. She often said “Life was not always easy but it was good.” Surviving Dorothy is her brother, John (Nancy) Lanham, sister-in-law Dorothy “Dottie” Lanham, brother-in-law’s, Bill Tibbitts and Harry Fitzpatrick and many nieces, nephews and cousins. Cremation will take place and a graveside service will be held in the spring at Rose Hill Cemetery. Memorial contributions may be directed to Old Settlers Picnic Assoication. Please share your memories and condolences at www.reynolds-jonkhoff.com. The family is being served by the Reynolds-Jonkhoff Funeral Home Cremation Services.

Dorothy Estel Lanham, 97 of Maple City, passed away on Tuesday, November 27, 2012 at Maple Valley Nursing Home with her loving niece, Bunny Lanham, at her side. Dorothy was born in Boone County, Indiana on October 24, 1915 to John and... View Obituary & Service Information

The family of Dorothy Estel Lanham created this Life Tributes page to make it easy to share your memories.

Dorothy Estel Lanham, 97 of Maple City, passed away on Tuesday,...