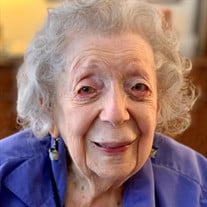 Dorothy (Mullins) Rollert On Sunday, May 24, 2020, Dorothy Hilda (Mullins) Rollert, beloved daughter, wife, aunt, mother, grandmother, great grandmother, and friend to many, passed away to join so many others that preceded her. Dorothy was born to George Franklin and Dorothy (Ferguson) Mullins, married Howard Charles Rollert, and is survived by their son Michael Howard Rollert (wife Susan), grandchildren, Thomas Michael Rollert and Kate Rollert French, and great grand daughter, Jane Dorothy French. An avid tennis player and sailor (who never learned to swim!), Dorothy lived a full life beginning in Detroit, Michigan. A polar bear graduate of Highland Park High School, she originally focused on an office career before meeting her husband, but then treasured many years of childrearing together. Howard’s career advancement took them to several Midwestern cities, but they owned a retreat, now a part of the Sleeping Bear Dunes National Lakeshore, that returned them to Northern Michigan, at least in the summer. Reentering the work force as a cartographer in Rockford, Illinois, ignited a return to Dorothy’s true passion, watercolor artistry. Her art interest began at age eleven as she and classmates of the Detroit Society of Arts & Crafts frequented artist Diego Rivera’s creation of the DIA’s numerous frescos entitled Detroit Industry. Though mostly self-taught, Dorothy studied with other artists eventually sharing her knowledge, teaching students for over 30 years and exhibiting hundreds of original works mainly in the Midwest. Sales of her works funded travel not only to exhibitions, but destinations in both the US and Europe that inspired more painting. Her paintings are held in private collections in England, Ireland, Japan, and across much of the United States and Canada. Retiring back to Michigan in 1976, Dorothy and Howard enjoyed many years together, working a studio to frame her ongoing paintings and continuing to exhibit. In 2015 Dorothy contributed her entire collection of framed artworks to the Battle Creek Art Center allowing a downscaling move to be near family in Traverse City and a return to Northern Michigan. Interment with Howard at Beckley Cemetery in Battle Creek. Enjoy your personal memories of Dorothy in lieu of services and memorials currently restricted, rejoicing in her new journey. Please feel free to share your thoughts and memories with Dorothy’s family at her tribute page at www.reynolds-jonkhoff.com. Arrangements provided through Reynolds-Jonkhoff Funeral Home of Traverse City.

The family of Dorothy Hilda Rollert created this Life Tributes page to make it easy to share your memories.