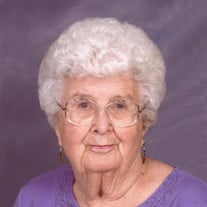 Dorothy Mae Round, 84, a life long resident of Traverse City, passed away peacefully at her home on Friday, March 27, 2015, surrounded by her loving family. Dorothy was born on Thursday, October 02, 1930, to the late Carl and Margaretta (Snyder) Dreves in Traverse City. She graduated from Traverse City St. Francis High school in 1949. She married Roger Robert Round on Saturday, June 17, 1950, at St. Francis Catholic Church in Traverse City. Dorothy had been employed at Meach's Cleaners for six years before she and Roger owned and operated West Bay Laundry and Cleaning, for over 20 years, prior to their retirement. Family was very important to Dorothy. She was actively involved in her children's lives, serving in Cub Scouts and Girl Scouts when they were young. She and Roger enjoyed time spent at the casino as well as spending their winters in Alabama. Dorothy was a member of Immaculate Conception Catholic Parish. She is survived by her husband, Roger; her children, Richard (Mary) Round of Traverse City; Karen (Walter) Babcock of Hancock; Maryellen Phillips of Traverse City; grandchildren, Amy (Nick) Rosner of Mt. Clemens, Emily Round of Traverse City; Zachary (Claire) Babcock of Minneapolis, MN; Jacob Babcock of Milwaukee, WI; Bryan (Amy) Pritchard of Napa Valley, CA; Hanna Pritchard of Ypsilanti; and great-granddaughter, Lillian "Lilly" Pritchard. Also surviving Dorothy are her siblings, Carl (Lorraine) Dreves of Traverse City; Barbara Harty of Traverse City; and Fred (Julie) Dreves of Acme; and many nieces and nephews. The funeral mass for Dorothy will be celebrated at 11 a.m. Monday, April 6, at Immaculate Conception Catholic Church, with The Rev. Fr. Anthony Citro presiding. Friends may greet the family at the church one hour prior to the mass. Burial will take place at Oakwood Catholic Diocesan Cemetery at a later date. The family has asked that Dorothy be remembered through memorial gifts to the Grand Traverse County Commission on Aging, (520 W. Front St. #B, Traverse City 49684) rather than with flowers. Please share your memories of Dorothy with her family at www.reynolds-jonkhoff.com. The family is being cared for by Reynolds-Jonkhoff Funeral Home and Cremation Services.

Dorothy Mae Round, 84, a life long resident of Traverse City, passed away peacefully at her home on Friday, March 27, 2015, surrounded by her loving family. Dorothy was born on Thursday, October 02, 1930, to the late Carl and Margaretta (Snyder)... View Obituary & Service Information

The family of Dorothy Mae Round created this Life Tributes page to make it easy to share your memories.

Dorothy Mae Round, 84, a life long resident of Traverse City,...