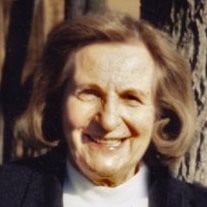 Dorothy Patricia Sudol Sterling, 88 of Traverse City, passed away peacefully on January 9, 2014 at Traverse Manor Assisted Living. She was born November 12, 1925, in Detroit, MI. to the late Stanley and Emilia(Studinska) Sudol. Dorothy was proud of her Polish heritage and had a strong Catholic faith. She enjoyed spending time with and watching her granddaughters grow, was an avid golfer, playing well into her eighties. She enjoyed fishing and walking her dogs on the shores of her Lake Michigan home, playing golf with her children and played a good game of bridge. Dorothy was a member of St. Francis Church and a past volunteer at Munson Hospital. Dorothy is survived by her children, Jim(Kathy) Sterling, Stephanie(Mike) Dow, Ian(Michelle) Sterling, two granddaughters, Stella and Bronwyn, and several nieces and nephews. She was preceded in death by her sisters and brothers, Helen, Albert, Stanley and Emilia. Visitation will be held at the Reynolds-Jonkhoff Funeral Home on Sunday, January 12, from 2-5PM with recitation of the Rosary at 5PM. The Funeral Mass will be celebrated on Monday January 13, at 11AM at St. Francis Catholic Church with interment to follow at Oakwood Catholic Cemetery. The family would like to extend a Thank You to those who assisted Dorothy along her journey with Dementia and a heartfelt Thank You to the staff at Traverse Manor, Bay Area Medical Family Care, Medicine Shoppe and Munson Hospice. In lieu of flowers the family asks that memorial be directed to Traverse Manor Assisted Living, 1899 Dracka Rd., Traverse City, MI 49685 or St. Francis Catholic Church,1025 S. Union, Traverse City, MI 49684.

The family of Dorothy Patricia Sterling created this Life Tributes page to make it easy to share your memories.