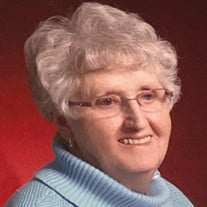 Dorothy Margaret Walt, 96, passed into eternal life at Cherry Hill Haven on January 11, 2022. Dorothy was the fourth generation of her family to be born and raised in the Traverse City area. She was born on December 19, 1925, on Monroe St. to the late John and Rose (Schwind) McGill. She attended Catholic schools in Traverse City, graduating as Valedictorian of the St. Francis class of 1944. She was also the organist at Immaculate Conception in her high school years. She was a lifelong member of the Immaculate Conception parish. After high school Dorothy attended Aquinas College in Grand Rapids, MI for one year. She then worked at the Unemployment Office in Traverse where she met the love of her life, Elgen Walt. They married at Immaculate Conception Church on September 6, 1947. Together they lovingly raised six children in the family home in Traverse City, which they purchased in 1952. Dorothy cared for the home and children while Elgen worked at the State Hospital and drove school bus. She also involved herself in the local Catholic schools her children attended. She did everything from working school carnivals and fundraisers to volunteering at the school library and sewing costumes for the operettas produced by Monsignor Passeno. She also looked after her own parents for a time, when they moved from their farm to a home across the street in their later years. Dorothy began a career at the Grand Traverse Area Catholic Schools in 1973 as school secretary at Immaculate Conception. From 1976 to 1990 she served with integrity as the executive secretary to the superintendent of GTACS. She was the gentle sage who instructed new superintendents in the history of GTACS, and steered them through the intricacies of the community, the local parishes, and the diocese. Dorothy was inducted into the GTACS Hall of Fame in 2011 as a testimony to years of dedication and service. In retirement she attended daily mass, played golf, was an active volunteer at Grand Traverse Area Right to Life, and thoroughly enjoyed her grandchildren who were all uniquely special to her. For a time, she was the historian for Immaculate Conception Church. Dorothy authored the history of Immaculate included in the diocesan book entitled, These Very Stones Cry Out. She also compiled a thorough family history album, gifting an album to each of her children. A highlight of her retirement was her and Elgen’s trip to the Holy Land in the1990’s. Her dedication to the rosary was unwavering in both sickness and health. Dorothy is survived by her children Therese (Thomas) Brinson of Lansing, Thomas of Traverse City, daughter-in-law Sharon of Big Rapids, Cindy (Alan) Robords of Mt. Pleasant, Mary (Bill) Becker of Traverse City, and Daniel (Lara) of Alexandria, VA; twelve grandchildren and twenty-one great grandchildren. She was preceded in death by Elgen, son Michael, brother Philip and sister Helen. Visitation for Dorothy will be held on Monday, January 24, 2022, from 4 to 6 pm with a rosary prayed at 6pm at the Reynolds Jonkhoff Funeral Home. The Mass of Christian Burial will be celebrated on Tuesday January 25, 2022, at 11:00 am with visitation one hour prior at Immaculate Conception Catholic Church. Graveside services will take place at Oakwood Catholic Cemetery where she will be laid to rest next to her beloved husband Elgen. Memorial contributions in memory of Dorothy may be directed to Immaculate Conception Catholic Church, the Carmelite Monastery, or to Mass Intentions.

Dorothy Margaret Walt, 96, passed into eternal life at Cherry Hill Haven on January 11, 2022. Dorothy was the fourth generation of her family to be born and raised in the Traverse City area. She was born on December 19, 1925, on Monroe St.... View Obituary & Service Information

The family of Dorothy Walt created this Life Tributes page to make it easy to share your memories.