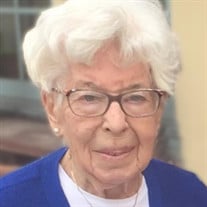 Dorris “Dorry” Mae Berry Price, 101, passed away peacefully, in her daughter’s arms, on Tuesday, February 8, 2022 at her home. Dorris Berry was born on October 18, 1920 in Oak Park, Illinois to the late Morphy Edison and Lura (Case) Berry. She married the love of her life Elbridge Lawrence Price on April 29, 1950 in Chicago. He preceded her in death on January 4, 2012. Dorry graduated from Oak Park River Forest High School in 1938. She continued her education at Principia College, and later, Katherine Gibbs Business School. She enjoyed working at Marshall Fields and Company department store, during and after the war. Dorry was always a stylish gal and a true lady. Her love and respect for the outdoors and northern Michigan began in her youth while going to Camp Kohana in Leelanau County. She spent countless summers with her in-laws on Old Mission Peninsula and later in her home on Shalda Creek in Good Harbor Bay until it was sold to the Sleeping Bear National Park. In 2003, Dorry and Larry moved to their Bluffs home, where she enjoyed sharing the sweeping views of the National Park with anyone that stopped by for tea and brownies. She also cherished her winters spent in Green Valley, Arizona. Dorris had a passion for nature and ecology. She loved flowers, trees, animals and a dip in the lake. She started ecology newsletters and gave new life to unused greenhouses at schools in the different cities they lived. Teaching children about soil, plants and ecology was important. She was a proud member of the Traverse City Garden Club and helped in starting the Garden Walk. Dorry was always active in her community. Dorris had a fan club of all ages. Maybe it was her brownies, but probably her encompassing, genuine unconditional love, interest and fun conversation. Dorry did love following politics and current events. After all, she lived a lot of history and followed some of those senators their whole lives. Dorris is survived by two sons and a daughter; Elbridge Thomas Price (Mary) of Waco, TX, Sarah (Sally) Berry Smith of Cedar, MI and David Lawrence Price (Jennifer) of Park City, UT. Also surviving are grandchildren: Gabriel Smith, Daniel (Hannah) Price, Johnny (Meagan) Price, and Olivia Price as well as a great-grandson, Ethan Smith-Lang and two on the way. She was preceded in death by her darling sister, Mary Elizabeth (Betty) Kuemmerling. #101 Secret: An active mind, being present and mostly a love of life, all of which she was blessed with her entire life. In accordance with Dorry’s wishes, cremation has taken place and no services are planned at this time. Those planning an expression of sympathy may wish to honor Dorris by donating to the Arbor Day Foundation. Please feel free to share your thoughts and memories with Dorry’s family at her tribute page at www.reynolds-jonkhoff.com. The family is being cared for by the Reynolds-Jonkhoff Funeral Home and Cremation Services.

The family of Dorris Berry Price created this Life Tributes page to make it easy to share your memories.