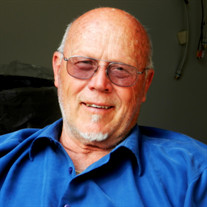 Douglas "Doug" Kosley, 71, of Traverse City, died Sunday, January 25, 2015, at his home. Doug was born on March 7, 1943, in Ypsilanti, MI, to Dr. Milton and Doris (Zeck) Kosley. He married Patricia "Patty" Shinavier on February 6, 1970, at St. Henry's Catholic Church in Lincoln Park, MI. Doug graduated from Olivet College, earning his degree in education. Following his schooling, he worked for the Detroit Board Of Education, as a science teacher. He also worked part-time at Olympia Stadium/Joe Louis Arena. During the summer vacations, Doug and Patty would travel all over the country, especially the West's wild places and Europe's capitols. Doug retired at 50, and then enjoyed golfing, gardening and woodworking. He made everything from gazebos and cat stands, to furniture and bird feeders. All animals were very important to Doug, especially his five cats, Lucy, Angel, Baby, Charley and Deeni. He loved feeding the birds and local wildlife. Doug was a caring and devoted husband, son, brother, uncle, brother-in-law and friend. He will be deeply missed by all who knew him. Surviving Doug is his wife, Patty, of 45 years. A celebration of Doug's life will be held at a later time, this Mid-summer. Memorial contributions in Doug's name may be directed to Patty Kosley, for the funding of this gathering.

The family of Doug Kosley created this Life Tributes page to make it easy to share your memories.