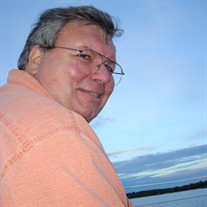 DOUGLAS R. DAIL Died: June 1, 2014 Douglas Richard Dail, age 66, of Traverse City, Michigan died on Sunday, June 1st at his home in Lakeland, Florida with his loving wife and sister at his side and under the comforting care of his Good Shepherd Hospice team. Born November 6, 1947, in Lansing, Michigan, he was the son of Richard A. and Selma (Helmkamp) Dail. Doug graduated from Everett High School, Lansing in 1965 and from Michigan State University in 1969 with a bachelor's degree in Hotel/Restaurant Management. On September 16, 1995 he married his wife Madelyn (Anderson). They lived in the Traverse City area for their entire marriage, and from 2005 spent their winters at their home in Florida. After graduation from college, Doug joined Sky Chefs, an American Airlines catering company. In April 1970 he was drafted into the Army, serving stateside in California during the Vietnam War until his honorable discharge in December 1971. He then continued his 25 year career with American Airlines and Sky Chefs, working in several cities, including Boston, New York, Detroit, Dallas, San Francisco and Austin. He worked both at AA headquarters in corporate purchasing as well as serving as general manager out in the flight kitchens. Upon retirement from American, Doug moved to the Traverse City area where in 1998 he and his wife started QuickBags, a company that delivered delayed airline luggage in several U.S. cities. They partnered their small business successfully until retiring in 2011. From a young age, he developed a strong work ethic, starting with his newspaper route. This allowed him to earn money to pursue his interest in electronics and purchase his first car. He was a loyal fan of the Michigan State University men's football and basketball teams and especially enjoyed watching the MSU band practices before football games. He thoroughly enjoyed the RV lifestyle and he and Madelyn traveled extensively around the country for both business and pleasure. He will long be remembered as a great encourager of his two daughters and their families, especially when it came to their education. Douglas is survived by his wife Madelyn, brother Dennis (Connie) Dail of Ocala, FL, sister Janis Segedy of Muncie, IN, daughters Stefanie (Adam) Ritch of Post Falls, ID and Keri (Thomas Shell) Mendoza of Pensacola, FL, two grandsons Aidan Ritch and Hendrix Kaeser, brother-in-law Donald (Diana Lipp) Anderson of Kewadin, MI and sister-in-law Marcia (Richard) Metzger of Brooklyn Park, MN, nephews and nieces, other family members and close friends. He was preceded in death by his parents. A memorial service will be held in Michigan later this summer where interment will take place at Lakeview Cemetery in Torch Lake, Michigan. Memorials may be made to his grandsons' Education Fund by sending checks to TBA Credit Union, PO Box 1049, Traverse City, MI 49685 with checks payable to Madelyn Dail. The family is being served by the Reynolds-Jonkhoff Funeral Home and Cremation Services Please visit www.reynolds-jonkhoff.com to share your memories of Douglas.

DOUGLAS R. DAIL Died: June 1, 2014 Douglas Richard Dail, age 66, of Traverse City, Michigan died on Sunday, June 1st at his home in Lakeland, Florida with his loving wife and sister at his side and under the comforting care of his Good Shepherd... View Obituary & Service Information

The family of Douglas R. Dail created this Life Tributes page to make it easy to share your memories.