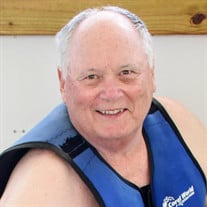 Douglas A. Jordan, age 70, passed away on Monday, January 18, 2021 at Munson Hospital in Traverse City. He was born September 20, 1950 in Windsor, Ontario to Joseph and Sophie (Wacheska) Jordan. He was raised in Detroit, studied at Schoolcraft Community College and graduated from University of Michigan-Dearborn in 1979. Doug was a veteran of the Vietnam War; he served two active-duty tours as a Marine (1967-1971), attained the rank of Corporal, and earned a bronze star with a combat V for valor. He worked for 24 years as an air traffic controller, receiving numerous commendations for his work. At the same time, he volunteered at VFW post #2780, serving as Commander from 1994 -1995 and 1995-1996 and receiving All State Commander for both terms. In retirement, he volunteered for the DAV, the Jordan Family Foundation, and the Cherryland Humane Society. He was a good man, quick witted, with a great sense of humor and always ready with a practical joke. Anytime anyone asked for help, he was there; whether it was snow blowing someone's driveway or contacting the DAV for a veteran. He was loved by many. He will be greatly missed by his wife of 36 years, Daryl Webster, and their two daughters, Ariana (Alex) and Sabrina. He is survived by his siblings, Angie, Sheila, Robert, and Roy, his close friend John LeBrun, and his many nieces and nephews. He is predeceased by his brother, Joseph. A celebration of Doug’s life will be planned in spring or summer. The family would be grateful for memories and photos shared on Doug’s online memorial (https://memories.net/timeline/doug-jordan-73340) or Facebook (https://www.facebook.com/doug.jordan.775/). In lieu of flowers, memorial donations may be made in Doug’s honor to the Disabled American Veterans (DAV 6602 Boone Rd. Traverse City, MI 49685) or the Cherryland Humane Society (1750 Ahlberg Rd. Traverse City, MI 49696). The family is being cared for by the Reynolds-Jonkhoff Funeral Home and Cremation Services.

Douglas A. Jordan, age 70, passed away on Monday, January 18, 2021 at Munson Hospital in Traverse City. He was born September 20, 1950 in Windsor, Ontario to Joseph and Sophie (Wacheska) Jordan. He was raised in Detroit, studied at Schoolcraft... View Obituary & Service Information

The family of Douglas A. Jordan created this Life Tributes page to make it easy to share your memories.