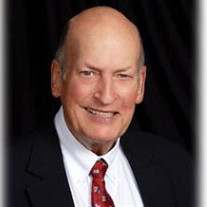 Traverse City – Douglas John Read, 76, of Traverse City, died October 18th, 2015 with his wife and children at his side. Doug was born to John and Nora (Baker) Read on April 23, 1939, in Highland Park, MI. He graduated Waterford Township High school. He received his undergraduate degree from University of Detroit and in 1971, his Juris Doctorate from Detroit College of Law. On August 28 1965, Doug married Julia Clare (Hoyt). Doug was preceded in death by his parents and his wife Julia. Doug married Susan (Kennedy) Read on March 10, 1984, in Traverse City, MI. Doug served in the Army National Guard and was honorably discharged in 1962. He was employed at General Motors, Detroit Diesel from 1961-1971. Doug launched his law career in Traverse City in 1971 as Grand Traverse County Assistant Prosecuting Attorney. He practiced with Williams, Coulter, Forster, Cunningham & Davison for thirteen years. He established law firms Read and Griffin, and Read & Sharp. He retired in 2005 as Partner in the firm of Garon Lucow Miller. Doug was the kind of lawyer most lawyers aspire to be. He displayed an uncanny ability to think logically and make judgments and assumptions based on the information presented. His excellent writing and public speaking skills demonstrated a superior command of the English language. He presented his clients' positions with passion and included a heavy helping of wit and humor. His interpersonal skills were unmatched, Doug treated all people with kindness, good nature, and respect. He was the kind of person you wanted to work for. For those who were privileged to work with him, he was Boss of the Year every year. Doug worked hard and played hard. His evolving interests included sailboat racing, snowmobiling, wood working, turkey hunting and genealogy. He enjoyed the NYT crossword puzzle, history and daily news. Doug took pleasure in golf and countless hours of gin at the Elks Club. He shot a hole in one. He shared his happiness in life with entertaining stories, irreverent jokes, unending puns and laughter. Doug relished family get togethers and the family traditions that emerged. He delighted in the encounter of an old friend. New acquaintances were met with openness and interest. He remembered names, family history, locations and dates. He utilized these skills to research his family genealogy. He was proud to be a member of the Sons of the American Revolution. Doug was magnanimous in his support of community development, He was YMCA President in 1971, Twin Bay Exchange President in 1975, and President of the TCGCC in 1983. He was an active member of St. Francis Parish and served on the Finance Committee. Doug was an attentive and encouraging father. He was a devoted husband. Doug is survived by his wife of thirty-one years, Susan, and his daughter Jennifer (Timothy) Gardner, and sons John Siderick Read and Thomas (Jill) Read. Doug is also survived by six adoring grandchildren, Jack and Audrey Gardner, and Brady, Owen, Collin, and Grayson Read. Doug is survived by his brother, Robert Read, of Traverse City. Visitation will be held from 4pm until 7pm on Thursday, October 22, 2015 at the Reynolds-Jonkhoff Funeral Home. A Mass of Christian Burial will take place at 2pm on Friday, October 23, 2015 at St. Francis Catholic Church with a visitation held from 1pm until 2pm. Burial will take place at the Grand Traverse Memorial Gardens. In lieu of flowers, memorial contributions may be directed to the Douglas J. Read Memorial Fund at Grand Traverse Area Catholic Schools. Please share your memories of Doug with his family by visiting www.reynolds-jonkhoff.com. The family is being cared for by Reynolds-Jonkhoff Funeral Home and Cremation Services.

Traverse City &#8211; Douglas John Read, 76, of Traverse City, died October 18th, 2015 with his wife and children at his side. Doug was born to John and Nora (Baker) Read on April 23, 1939, in Highland Park, MI. He graduated Waterford Township... View Obituary & Service Information

The family of Douglas John Read created this Life Tributes page to make it easy to share your memories.