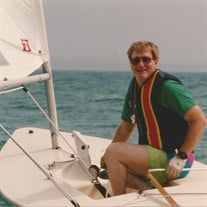 On January, 21st 2021 Douglas William Schroeder loving husband and father of two passed away peacefully at the age of 78. He was born amid the sounds of air raids, in a darkened hospital to William and Hilda (Gage) Schroeder of St. Charles, Michigan on July 9th, 1942. He was named after General Mac Arthur. He worked the family farm from age 8 and after graduating St. Charles High School in 1960 he attended Adrian College and received a degree in education. He taught English at Carrollton High School and then went to work at Dow Corning in Midland, Michigan where he managed the International Distribution department. In August of 1964, he married his high school sweetheart Judith Elaine (Mansfield) and the two moved to Freeland, Michigan. Doug’s heart for helping people made him an outstanding field representative for the Michigan Education Special Services Association where he negotiated health and long term disability benefits for school teachers and staff. Doug was unorthodox and had an independent way of tackling problems which earned him the name – Maverick. He worked tirelessly fighting for the “little guy” and did so for 32 years. Doug was also passionate about the environment and fought to preserve farmland on Old Mission Peninsula where he lived. He served on the board of directors at TBA Credit Union and volunteered his time at the Old Town Playhouse. Doug was the eternal optimist and always saw the best in others and in every situation. He was a member of the Optimist Club and the Grand Traverse Yacht Club for many years. He treasured time on the water and although he chartered boats in many parts of the world he loved sailing Grand Traverse Bay the most. When he and Judy retired in 2003 they set off in their RV to travel the country and enjoyed “winter residency” in Casa Grande, Arizona. Doug is survived by his wife Judith, his son Douglas and daughter Wendy (Kelly) his brother Kenneth Schroeder, brother in law Richard Mansfield and his grandchildren Grace, Summer and Madison. A celebration of life will be held this summer when all his friends and family can gather safely together. Donations can be made to the Grand Traverse Regional Land Conservancy and the Old Town Playhouse.

On January, 21st 2021 Douglas William Schroeder loving husband and father of two passed away peacefully at the age of 78. He was born amid the sounds of air raids, in a darkened hospital to William and Hilda (Gage) Schroeder of St. Charles,... View Obituary & Service Information

The family of Douglas William Schroeder created this Life Tributes page to make it easy to share your memories.