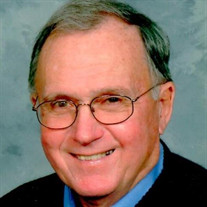 Douglas D. Slack, 81, of Traverse City passed away July 23, 2018 at Orchard Creek. Doug was born on June 13, 1937 in Kalamazoo to the late Berle D. and Helen Ida (Dougherty) Slack. As a young boy, the family moved to Traverse City. Doug graduated from Traverse City High School in 1955. On August 24, 1957 he married the former Gail Eaton who passed away in 1997. Doug was a technician who fixed adding machines and computers for the banking industry. He worked for Burroughs which is now known as Unisys until he was in his mid 50's. At that time he then went to work as a member of the grounds crew that took care of the Bear at the Grand Traverse Resort and worked until 2017 when his body could go no further. Above all else, Doug cherished his personal relationship with Jesus Christ and his family. He loved spending time with them and enjoyed a special relationship with each member. In his free time, he enjoyed playing golf, metal detecting, hunting and bowling. He once bowled a 299 at the J&G Bowling Alley on Woodmere and was able to keep that last lone pin that was left standing. Doug was a member of the NRA and was a coin collector. His faith was also very important to him and was a member at East Bay Calvary Church and most recently at New Hope Community Church. On October 3, 1997, Doug married Julia Hanna. . She gave him much joy and companionship throughout their years together. Their 18 grandchildren and 4 great grandchildren were their great passion, as well as giving of themselves to others. Doug was preceded in death by his wife Julia, wife Gail, and sister Constance "Connie" Scott. Doug is survived by his children Sherri (Brad) Cramer, Tim (Tonya) Slack, Rick (Amy) Slack, Ron (Ruthi) Hanna, Tracey (Jonathan) Dennis, and Mark (Kate) Hanna; grandchildren Tarah, Tia, Heidi, Shawn, Summer, Chloe, Shepard, Madelynn, Abbey, Isaiah, Jake, Steven, Lydia, Lucas, Dyllan, Quinn, Cooper, Ellery; and four great grandchildren Mason, Kennedy, Emma, and Kate. Funeral services will be held at 11:00 am on Friday August 31, 2018 with visitation beginning one hour prior at New Hope Community Church. A reception will follow the funeral service along with graveside services at Oakwood Cemetery. Memorial contributions may be directed to New Hope Community Church or to East Bay Calvary Church.

The family of Douglas D. Slack created this Life Tributes page to make it easy to share your memories.