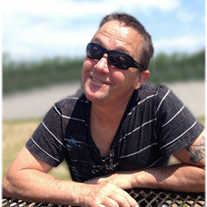 CEDAR - Douglas “Doug” Lee Strait, 54, of Cedar passed away February 10, 2019, at home. The world has lost, among many other things a compassionate, selfless soul, who was loved by all who knew him. Doug was truly one of a kind, possessing an effortless sense of humor, and the ability to listen intently regardless of what you were about to say and without any judgement. Doug was born March 20, 1964, in Lansing, to parents Ronald Lee and Jenny Lee (Quandt) Strait. The family of 6 moved to Traverse City when Doug was in kindergarten. They lived on “The Strait Farm” where he learned from his father how to raise cows, horses, chickens and pigs. Doug loved everything about the outdoors. Especially hunting (including an African Safari), camping and kayaking (Lake Dubonnet was a favorite spot), fishing, and playing golf, especially at Mistwood Golf Course. He looked forward to his golf outing at Shanty Creek every year with the guys. He was also involved with an archery league that he enjoyed very much. Doug enjoyed bonfires and a good Surf n’ Turf dinner, and of course Ben and Jerry’s ice cream- Caramel Sutra to be exact. He was a true Michigan sports fan, especially football. Doug was proud to have served in the US Navy, and was also proud of being a farm boy. Doug’s legacy will be carried forward, as he was a wonderful father, friend, and grandpa. Doug is survived by his daughters Jessica Strait, Sara Strait, mother Jenny Strait, siblings Dan Strait, Dave Strait, Debbie Strait, and grandson Bradyn Shafer. Doug was predeceased by his father Ronald Strait, uncle Wayne Strait and father in law Wayne Stricker. A funeral service to honor the life of Doug will take place Friday, February 15, 2019 at 11:00am at the Reynolds Jonkhoff Funeral Home with visitation one hour prior. Memorial contributions may be directed to the family c/o Reynolds-Jonkhoff Funeral Home, 305 Sixth St., Traverse City, MI 49684. Please visit www.reynolds-jonkhoff.com to share your condolences and memories with the family. The family is being cared for and served by the Reynold Jonkhoff Funeral Home.

The family of Douglas 'Doug' Strait created this Life Tributes page to make it easy to share your memories.