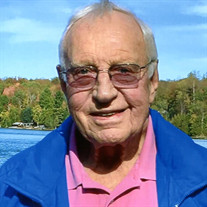 Those wishing to make a contribution to the Lornie G. and Midge A. Kerr Central Michigan University Endowment Scholarship Fund can donate online here: Click Here Lornie G. Kerr joined his beloved wife and best friend of 62 years, Margery Kerr, in heaven on Saturday, October 28, 2017. Lornie was born in Port Huron, MI on Thursday, January 7, 1932 (The same exact day and year of his wife Margery). He attended Port Huron High School, where he excelled at football and basketball. Sports were his ticket to Central Michigan University. Lornie attended CMU from 1950-1954 where he met the love of his life. He was an All-Conference quarterback for the Chippewas. While at CMU, Lornie was a member of the Varsity Club Phi Delta Kappa and Delta Sig Phi. Sports again opened a door for Lornie to begin his career at Mt. Pleasant High School, where he coached football and basketball. He taught industrial arts and would later become Vice Principal and Athletic Director. Lornie is credited with starting the Michigan State Basketball Tournament. Higher education was Lornie’s calling and he went to work for Michigan State University where he earned his PhD. While at MSU, he was Assistant Director of Administrative Services from 1965-1970. In 1970 Lornie continued his career in education and went to work for Northwestern Michigan College as Dean of Students. He would eventually retire as Vice President of Student and Administrative Services in 1989. Lornie was a member of Morning Kiwanis Club, Traverse City Osteopathic Hospital Board where he served as president, President of CMU Alumni Club, Port Huron Sports Hall of Fame, member of the Romeos. He also sat on the YMCA Board. Other accomplishments include member and past chair of American Association of Community Colleges on International Education, Chairman of National Council on Community Colleges, Chairman of Foreign Student Affairs and International Education consultant for the Bureau of Cultural Affairs (US State Department). His service took him to Hong Kong, Singapore, Thailand, Philippines, Iran, Kuwait, Jordan, Saudi Arabia, Bahrain, Belize and Norway. Lornie was best known as the best Father, Grandpa and Great Grandpa. Lornie enjoyed outdoor activities including golf, fishing and hunting. ”Deer camp” was one of his favorite annual events. Lornie is survived by his four children, Patti (Gary) Lingaur, Kathy (John) Runft, Mike (JoAnne) Kerr and Dan (Cheryl) Kerr; 9 grandchildren and 9 great grandchildren. He was preceded in death by his wife Margery “Midge” (Wright) Kerr and his parents Frederick and Evelyn (Craker) Kerr. A visitation will be held on Thursday, November 2, 2017 at the Presbyterian Church from 5 p.m. to 7 p.m. located at 701 Westminster Road, Traverse City, MI 49686. A funeral service will be held on Friday, November 3, 2017 at 11 a.m. at the Presbyterian Church, with visitation beginning at 10 a.m. Pastor Jose Lopez will officiate. Those wishing an expression of sympathy are encouraged to either direct contributions to the Lornie G. and Midge A. Kerr Central Michigan University Endowment Scholarship Fund or flowers. Both can be sent c/o Reynolds-Jonkhoff Funeral Home, 305 6th Street, Traverse City, MI 49684. You can donate online via this link: Click Here

The family of Dr. Lornie G Kerr created this Life Tributes page to make it easy to share your memories.

Those wishing to make a contribution to the Lornie G. and Midge...