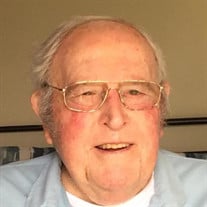 Dr. Ronald John Jenkins, DDS Ronald “Ron” Jenkins, of Traverse City, passed away peacefully on Wednesday, October 28, 2020. He was born and raised in Detroit, Michigan, son to Florian Jenkins and Marian (Schmid) Jenkins in 1927. Ron was 93 years old. He served his country proudly in the United States Army. He had the ability to type amazingly fast and with precision. So, for that reason he was given orders to use his talents for the Army in Washington D.C. After his honorable service, Ron started his college years at the University of Michigan, and then onto the University of Detroit, where he earned his Doctor of Dental Surgery. Then he headed back to U of M for two years to become a pediatric dentist; he loved working with children. Ron was an avid sports fan and passionate about his wolverines. Rarely would he ever miss a game either in person, on television, or over the radio waves. After they both graduated from U of M, Ron married Elizabeth (Beth) Klaver on July 19, 1952. The couple moved to Birmingham, Michigan to start Ron’s pediatric dentist practice. Ron and Beth had three children, and three grandchildren who all survive him. They all cherish the special times they spent together as a family on Lake Skegemog. Children Betsy (Todd) Heffron, of Waltham, MA, Daniel Jenkins, of Rapid City, MI, and Maryann (Dan) Bingham, of Westminster, CO; grandchildren who all loved their grandfather deeply, Stephen O’Dowd, Melissa Bingham, and Roxanne Bingham. His wife Beth preceded him in death in 2005. In 2007, and on his 80th birthday he married Carolyn Kirn Butters-Jenkins who survives him. Ron had a strong faith, and was a member of the Presbyterian Church of Traverse City Michigan. A celebration of life will be held at 2:00 PM, Friday, Jun. 25, at the Presbyterian Church of Traverse City, 701 Westminster Road. Visitation will begin at 1:30 PM, and continue until the time of service. A light reception will follow. For those who wish to share a memory or condolences, you may visit www.reynolds-jonkhoff.com

The family of Dr. Ronald John Jenkins, DDS created this Life Tributes page to make it easy to share your memories.