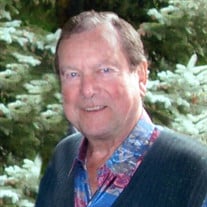 Durwood Clark Allen, 84, of Traverse City and formerly of Birmingham and Harbor Springs, passed away Sunday, May 1, 2016 at The Grand Traverse Pavilions in Traverse City. On May 30, 1931 Durwood was born in Highland Park MI to the late Durwood Ernest and Rhoda Amelia (Vinz) Allen. Honorably Durwood served our Country in the United States Navy during the Korean War. After his time in the service he went on to college at the University of Florida on a swim scholarship and finished his schooling a Michigan State University. One special summer he met Leslie Gale Stevens at a beach in Caseville, MI. Eventually, he would propose to her under the Beaumont Tower at MSU. The two were married on July 12, 1958 in Highland PARK, MI. Together they lovingly raised two wonderful daughters, Dana and Kristen. Durwood worked as a banker for most of his life. He retired after 37 dedicated years as an Executive Vice President of Standard Federal Savings and Loans. One of his proudest business moment when he was younger was to help save an Ice Arena on Square Lake Road from Bankruptcy, he even had his daughters and friends helping with the Zamboni and the snack shop. Also, he was active in many organizations including; the Jaycees of Birmingham, Bloomfield Open Hunt, Kiwanis Club in Harbor Springs, Score of Petoskey and he was a member of the Birchwood Golf & Country Club in Harbor Springs. He enjoyed his bike tours all over Europe with Leslie, downhill skiing, water skiing, golf, tennis and many other activities. He even researched his family ancestry back to the 1500’s in England. Family however was most important to Durwood. He loved his wife and daughters but his grandchildren brought him his greatest joy. He was always so proud of them and their accomplishments. He could be frequently spotted at the base of An Alpine Ski Racing Slope, hosting a ski team at his home, along a Cross-Country Running Course cheering, at a swim meet or even a trilithon. Currently he was proud of Jamie for making it to the Olympic Trials for Rowing and proud of Briggs for his THOW’s (Tiny House On Wheels) venture. Durwood will be fondly remembered for his sense of humor and love for his family. He will be deeply missed by all who knew him. Durwood is survived by his wife Leslie of 57 dedicated years, daughters; Dana Allen of Traverse City, and Kristen Allen of Petoskey, grandchildren Jamie Chapman and Briggs Chapman, a brother-in-law Edson (Ruth) Stevens of Ebikon Switzerland, two nieces; Daniele (Reggie) Stevens-Chapman of Laurel, MD and Chantel (Frederick) Stevens-Badel of Chavannes-Le-Chene, Switzerland, special cousins, Richard Dixon of Caseville, MI and David Dixon of Manhattan Beach, CA, beloved cats Champ and Harley and many other loving family members and friends. Durwood is preceded in death by his parents and many Pets. Visitation will be held on Wednesday, May 4, 2016 at the Reynolds-Jonkhoff Funeral Home from 3-6pm and a visitation in Harbor Springs at the First Presbyterian Church from 2-4pm on Friday, May 6, 2016. Memorial contributions may be directed to the Little Traverse Bay Humane Society. Kindly share thoughts and memories with Durwood’s family at www.reynolds-jonkhoff.com.

Durwood Clark Allen, 84, of Traverse City and formerly of Birmingham and Harbor Springs, passed away Sunday, May 1, 2016 at The Grand Traverse Pavilions in Traverse City. On May 30, 1931 Durwood was born in Highland Park MI to the late Durwood... View Obituary & Service Information

The family of Durwood Clark Allen created this Life Tributes page to make it easy to share your memories.

Durwood Clark Allen, 84, of Traverse City and formerly of Birmingham...