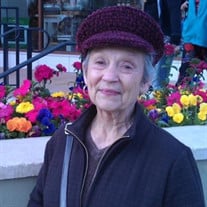 Mrs. E. Suzanne Carnegie of Traverse City, Michigan, passed away on Monday, December 6, 2021, at the vibrant age of ninety-nine. Suzanne was born to Chester and Lena (Griese) Wetzel in Royal Oak, on Friday, March 24, 1922. Suzanne lived a fulfilling and exciting life—as a young woman she worked as a switchboard operator for Michigan Bell before dedicating herself to making a home for her growing family. When time allowed, she loved to travel, garden, and volunteer at the local food bank. One of her greatest achievements was obtaining her private pilot’s license at the age of 21. Also noting, she held a valid driver’s license until she was 99. Suzanne leaves behind her children, Patricia (Dennis) LaBelle, Suzanne Gail (William) Richardson, William (Stephanie) Carnegie, Jill (James) Carnegie-Tomasi, Scott (Connie) Carnegie, and David Carnegie; numerous grandchildren, great-grandchildren, nieces, nephews, and other beloved members of the family. She was preceded in death by her parents; husband of 65 years, William D. Carnegie; sisters Helen Bradshaw and Marjorie Chenoweth and brother Harry Wetzel. A private family service will take place at a later date. She will be laid to rest with her beloved William, at Oakwood Cemetery, Traverse City, MI Those wishing to offer an expression of sympathy are encouraged to make a memorial contribution to Big Brothers Big Sisters, P.O. Box 1632, South Bend, IN 46601.

The family of E. Suzanne Carnegie created this Life Tributes page to make it easy to share your memories.