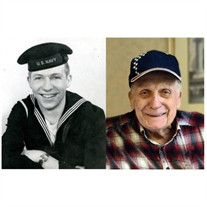 TRAVERSE CITY - Earl M. Cadmus, 94, passed away July 7, 2021 at The Villa Assisted Living Facility. He was cared for by many wonderful and caring aids. He was also under the care of Hospice of Michigan who were so loving and helpful with his care. Thanks to you all. Earl worked for Michigan Bell for 35 years then early retirement. Earl and Doris took many bus trips and cruises. Earl loved to play golf, go fishing, and deer hunt with son-in-law George. He also played lots of cards. Earl was a native of Traverse City and was a 75-year member of the VFW Post 2780. He served on the honor guard for many years. He was also a Eagles member for many years. Earl was born November 8, 1926 to Robert and Lena Cadmus. He joined the Navy when he was 17 and served two years on the USS Webster ARV2 rank. He was coxswain V6 he had victory medal, American area campaign medal and Asiatic pacific area campaign medal. He was honorably discharged June 28, 1946. Earl met and married Doris Horton on September 10, 1949. They had three girls; Shari, Cindy and Julie Ann. Earl was preceded in death by his loving wife of 62 years, his parents, brother Bob, his in-laws, youngest daughter Julie, and sister-in-law, Bernetta. Earl is survived by his daughters; Shari (George) Ricket of Kingsley, and Cindy (Jim) Kruse of Traverse City, grandchildren; Melissa (Chuck) Schneider, Wayne Ricket and Heather Ricket, Alisha (D.J.) Gauthier, Adam Kruse and William Ulman, five great-grandchildren; Madisyn, Brayden, George, Samantha and Maria, three great-great grandchilren, two nieces and one nephew and other family and friends. A celebration of life will take place at 1:00 PM on Saturday, August 28, 2021 at the VFW Post 2780 on veterans drive. Per Earl’s wishes, cremation has taken place and he will be laid to rest at Maple Grove Cemetery in Grawn. Donations in Earl’s memory may be directed to the VFW Post 2780, 3400 Veterans Drive, Traverse City, MI 49684. Please share a memory with Earl’s family by visiting his tribute page at www.reynolds-jonkhoff.com. The Reynolds-Jonkhoff Funeral Home and Cremation Services is serving the family.

TRAVERSE CITY - Earl M. Cadmus, 94, passed away July 7, 2021 at The Villa Assisted Living Facility. He was cared for by many wonderful and caring aids. He was also under the care of Hospice of Michigan who were so loving and helpful with his... View Obituary & Service Information

The family of Earl Milton Cadmus created this Life Tributes page to make it easy to share your memories.