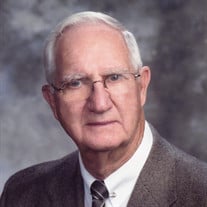 Ed Petty, 95, of Traverse City passed away on Monday, December 6, 2021 surrounded by his family. Ed was born on July 26, 1926 in Uhrichsville, Ohio to Harry and Mary Etta (Wright) Petty. On January 8, 1949, he married Janet Burroway at the Immaculate Conception Church in Dennison, Ohio. They enjoyed 66 years of marriage until Janet’s passing in 2015. Ed was a realtor for over 50 years in Traverse City and a longtime member of the Board of Realtors. After his retirement, he continued his involvement in real estate with Mid-American Title. His contributions to the real estate profession were extensive and he received numerous awards. Most recently he was honored with the Ed Petty Lifetime Achievement award. His greatest joy was his family and friends. He and Janet were devoted to each other and they provided a wonderful life for their children. Ed was a WWII veteran and a proud American. Ed is survived by his son, Eddy (his partner, Barbara), daughters, Mari (Mark) Scott, Kim (Michael) Casciano, Pennie (Patrick) O’Brien, Stacey (Martin) Gallagher, grandchildren, Jessica (Ross), Abbey (Matt), Sam, Say, Chelsea, Brett, Kristie (Jon), Tony (Kari), Shea (Chelsie), Kaitlyn, Jack, Kyle (Gabi), Daniel, Julia and Laura, great grandchildren, Copeland, Ellowyn, Berkleigh, Emerson, Austin, Grace, Amelia, Anthony and Savannah, sister, Joan Unger, son-in-law Ed Walters and many special nieces and nephews. He was preceded in death by his parents, siblings, Mary Jane, Betty Lou and Bill, wife, Janet and daughter, Jan. Friends are welcome to visit with Ed’s family from 2:00 to 4:00 p.m. on Sunday, December 12, 2021 at the Reynolds-Jonkhoff Funeral Home, 305 Sixth St. Traverse City, Michigan 49684. Mass of Christian Burial will take place at 11:00 a.m., with visitation starting at 10:00 a.m., on Monday, December 13, 2021 at St. Francis of Assisi Catholic Church, 1025 S. Union St., Traverse City, Michigan 49684. Military honors will be conducted under the auspices of the U.S. Army, Cherryland V.F.W. post 2780 and American Legion post 35. Memorials may be directed to GTACS, St. Francis of Assisi Catholic Church or The Father Fred Foundation. Ed’s family would like to thank the special staff at Orchard Creek and to Hospice of Michigan for their wonderful care. Please feel free to share your thoughts and memories with Ed’s family at his tribute page at www.reynolds-jonkhoff.com. The family is being cared for by the Reynolds-Jonkhoff Funeral Home and Cremation Services.

Ed Petty, 95, of Traverse City passed away on Monday, December 6, 2021 surrounded by his family. Ed was born on July 26, 1926 in Uhrichsville, Ohio to Harry and Mary Etta (Wright) Petty. On January 8, 1949, he married Janet Burroway at the... View Obituary & Service Information

The family of Eddy L. Petty created this Life Tributes page to make it easy to share your memories.

Ed Petty, 95, of Traverse City passed away on Monday, December...