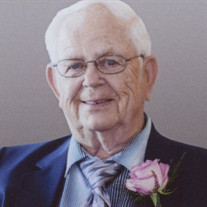 Edmond “Butch” Clemence Garvin Edmond “Butch” Clemence Garvin born August 23, 1926 of Cedar, Michigan has passed away on April 20, 2019 in Traverse City, Michigan. He was 92 years old. Butch was always involved with service to his community and country. Butch served his Country in World War II and received the Combat Infantry Badge as well as the World War II victory medal. As an active member of the Cedar Chamber of Commerce he proudly co-founded the Cedar Polkafest. Butch worked at Cluff Well Drilling before his retirement in 1991. Butch spent many of his retirement years beautifully maintaining the local softball fields and the Solon Township cemetery. He was also very active in the Cedar Hilltoppers Snowmobile Club where he frequently was cooking for local events smoking pork and chicken for all to enjoy as well as card playing with members and friends. Butch was well known by his friends and family for his gift of gardening. It was commonplace to find his family and friends stopping by for fresh ever bearing raspberries and good conversation. Butch loved his church and was a faithful parishioner of Holy Rosary Church in Cedar. Butch shared his love through service to others and was truly a shining example of America’s Greatest Generation. Butch was preceded in death by his loving wife of 64 YEARS, Irene Garvin, his parents John and Susan Garvin, and his siblings Trudy, Steve, Edward, Andy and John. He is survived by his sister, Ann Mazurek, and his three children Janet (Kenneth) Novak of Cedar, Michigan; Kenneth (Lynn) Garvin of Cedar, Michigan, and Trudy (John) Gresso of Interlochen, Michigan. Butch had five grandchildren Kerri (Blain) Scheller, Jenna (Richard) Groll, Kenneth (Ian) Garvin, Tara Novak, and River Gresso; and three great grandchildren; Alyvia, Kaden, and Leland. A visitation for Butch will take place from 9:00 – 11:00 am on Saturday, April 27, 2019 at the Reynolds-Jonkhoff Funeral Home with a Memorial Service beginning at 11:00 am. In honor of Butch, a pig-roast will take place at the Cedar Hilltopper’s Club, 7949 S Schomberg Road, Cedar, MI 49621 immediately following the service. Memorial contributions may be directed to, Holy Rosary Church, 6982 S Schomberg Road, Cedar, MI 49621, Munson Hospice House, 450 Brook Street, Traverse City, MI 49684, or Cedar Fire Department, 8907 Raildroad Ave, Cedar, MI 49621.

The family of Edmond Clemence Garvin created this Life Tributes page to make it easy to share your memories.