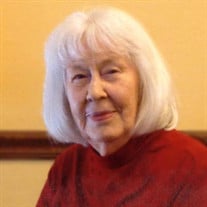 Edna Earl Scott (nee Greeson) passed away peacefully on Friday, October 9, 2020 at Orchard Creek Assisted Living, Leelanau County, Michigan. Edna was born on July 5, 1923 in Resaca, Georgia to the late Hearl Greeson and Vera Bowen Greeson. When her family moved to Michigan she attended Hazel Park High School where she met the love of her life, John F. Scott, Jr. (Jack Scott). It’s no wonder Jack was the love of her life as Jack was an all-state basketball player at Hazel Park High School and Edna was an equally outstanding athlete. She was the captain of her high school basketball team which won the Michigan State High School basketball championship her senior year, and she excelled at baseball and bowling, avocations she pursued for most of her life. After World War II, when Jack returned from overseas, Jack and Edna were married on September 14, 1946 and moved to Mt. Pleasant where Jack attended Central Michigan University on the GI Bill while lettering in football, basketball, and baseball. Edna also attended Central. When Jack graduated from CMU and went on to be a coach and later an administrator, Edna was the Executive Secretary to the Superintendent of Schools. She was known and respected by her co-workers and supervisors alike for her meticulous work and as a grammar wiz. Upon retirement Jack and Edna moved to Winter Haven, Florida where they shared an active life. Jack played golf and Edna bought and sold real estate, another avocation at which she excelled. Jack passed away in 2003. Edna was predeceased by her brothers, Dr.Vince Greeson and Trammel Greeson. She is survived by her sister-in-law , Shirley Scott Roth, and many nieces and nephews who mourn the loss of their very special “Aunt Edna”. The family is grateful for the loving care of the staff at Orchard Creek and Hospice of Michigan. In accordance with her wishes no memorial services will be conducted. Her cremated remains will be placed next to those of Jack in the columbarium at Florida National Cemetery in Bushnell, Florida. She will be remembered for her kindness, honesty, and generosity in the hearts and minds of all who knew and loved her. Edna’s family is being cared for by the Reynolds-Jonkhoff Funeral Home and Cremation Services.

The family of Edna Earl Scott created this Life Tributes page to make it easy to share your memories.