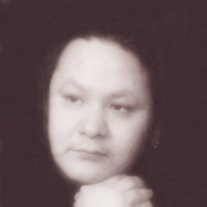 Traverse City-Edward Thomas "Eddie" Anderson, 41, of Traverse City, died Sunday morning, January 27, 2013, at Munson Medical Center following a brief illness. Born September 30, 1971, in Leelanau County, he was the son of Thomas J. and Victoria M. (Chippewa) Anderson. Eddie was a member of the Grand Traverse Band of Ottawa and Chippewa Indians. For a number of years, Eddie worked as a short order cook, working in various restaurants through-out the Grand Traverse Area. Eddie will fondly be remembered for his free spirited out going personality, his great people skills and his giving ways. He will be sorely missed by his family and many friends. He is survived by his father, Thomas J. "Tom" Anderson of Traverse City; siblings, Joanne (Scott) Winowiecki of Traverse City, Lisa (Joe) Cox of Waterford and Tom Anderson of Tempe, Arizona; six nieces and nephews, Craig, Kellen, Patrick, Isabel, Thomas and John; along with aunts, uncles and cousins. He was preceded in death by his mother, Victoria M. "Vicki" Anderson and his maternal and paternal grandparents. Memorial services will be held at the Reynolds-Jonkhoff Funeral Home on Friday, February 1, 2013, at 10:30 A.M. with visitation one hour prior to the service. Rev. Paul Raphael will officiate. Cremation has taken place per Eddie's request. In remembrance of Eddie, memorial contributions may be directed to the charity of choice. Kindly share your memories with the family on their online guestbook at www.reynolds-jonkhoff.com Arrangements were made with the Reynolds-Jonkhoff Funeral Home and Cremation Services.

The family of Edward "Eddie" Thomas Anderson created this Life Tributes page to make it easy to share your memories.