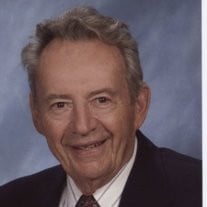 Edward Orvil Falberg, 92 of Traverse City, passed away peacefully on Tuesday, September 10, 2013 at the Traverse Victorian Assisted Living. Ed was born on June 18, 1921 in Moline, IL to the late Fred and Hazel (Eckert) Falberg. He married the love of his life, Jeanne P. Stoffregen on June 21, 1947 in Birmingham, MI. Together they lovingly raised three wonderful daughters. Ed received his bachelor’s degree in metallurgical engineering from Michigan Tech University. He served as captain in the U.S. Army Corps of Engineers during World War II. He was employed as a metallurgist for five years with General Motors and was employed for 35 years with Gulf and Western Industries. He retired in 1982 as president of the metals group. Ed also served many years as a Methodist Church usher and also served for 10 years on the Board of Directors for the Michigan Tech Fund. Ed loved sailing and was a member of the Power Squadron. Most importantly Ed loved his family. He will be deeply missed by them and all who knew him. Surviving Ed is his wife Jeanne of 66 years, daughters, Pamela S. Dionise, Dianne M. (Leo Hazen) VanGemert, and Linda J. Samul, grandchildren, Tina (Kevin) Makarewicz, Christopher (Patsie) Dionise, Gregory (Kathy) VanGemert, Tracy Samul, Scott Samul, great grandchildren, Matthew, Andrew, Jack, Sophia, Charlie, a sister-in-law Carrol Falberg, and many other loving family members and friends. Ed is preceded in death by his parents, brother Robert, granddaughter, Laurel, son-in-laws Jim Dionise and Richard Samul. Visitation for Ed will take place on Monday September 16, from 4-8pm at the Reynolds-Jonkhoff Funeral Home. Funeral services will take place at 11am on Tuesday, September 17, 2013 also at the funeral home. Burial will take place at Oakwood Cemetery. Memorial contributions may be directed to the Central United Methodist Church.

Edward Orvil Falberg, 92 of Traverse City, passed away peacefully on Tuesday, September 10, 2013 at the Traverse Victorian Assisted Living. Ed was born on June 18, 1921 in Moline, IL to the late Fred and Hazel (Eckert) Falberg. He married... View Obituary & Service Information

The family of Edward Orvil Falberg created this Life Tributes page to make it easy to share your memories.