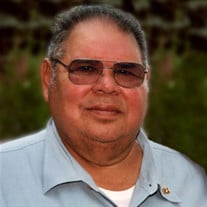 Edward Galindo, Sr. passed away quietly September 25th at Hospice House in Traverse City. Born November 23, 1941 in Tempe, Arizona, he was the youngest child of Carlos Galindo and Maria Segovia-Orta Galindo. During his long career, Chef “Eddie G” worked and managed restaurants in Phoenix, Las Vegas, and southeast & northern Michigan. In 1965, he married Virginia Binion. In the 1970s, Ed was employed at the new Campus Inn in Ann Arbor where members of the U of M football team were often special guests. He hosted the team for family dinners at his home. In 1976, Ed and his family moved to Leland, where he became chef at The Cove, and later, Leland Lodge. During the 1980s, he was chef at Traverse City Golf & Country Club, managed Conley’s Irish Cottage, and was owner of Eddie G’s Roadhouse in Cedar. He was a lifetime Masonic Fraternal Brother of the Ann Arbor Lodge, Empire Lodge, past Worshipful Master of the Northport Lodge and honorary member of the Benzie Lodge. Ed was preceded in death by his wife, parents, brothers Charles, Norbert, David, Tony, and sister, Virginia. He is survived by his son Edward Galindo, Jr. (David Williams) of Traverse City. His mijo is grateful for the love and support of longtime friends, restaurant patrons, home health care providers, the staff at Grand Traverse Pavilions, Munson Medical Center and Hospice House. A private memorial service will be held with internment the Garden of Remembrance at First Congregational Church in Traverse City. Gifts in Ed’s memory can be directed to Munson Hospice House, Traverse City.

The family of Edward Galindo Sr. created this Life Tributes page to make it easy to share your memories.