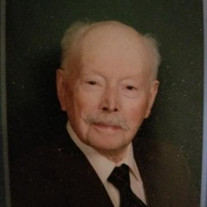 Edward W. Gardner, Jr. Died Wednesday, September 19, 2018 MANTENO, IL. - Edward W. Gardner, Jr., 95, of Manteno, IL and formerly of Interlochen, passed away Wednesday, September 19, 2018 at the Illinois Veterans Home in Manteno, Illinois. Ed was born on Sunday, March 25, 1923 to the late Edward and Consolata (Brown) Gardner in Chicago, IL. A veteran of WWII, Ed served our country as a member of the 303rd Bomb Group, 427th Bomb Squad, United States Air Force (Army Air Corp) as the navigator on the B-17G bomber, Buzz Blonde. On January 10, 1945, Ed’s plane suffered a mid-air collision and he was “tossed” out of the aircraft unconscious and with his parachute only partially on. When he came to, he was able to safely harness and deploy his chute, however upon landing was turned over by local farmers and incarcerated in a German POW camp for four months, prior to the end of the War. Ed enjoyed sharing his wartime exploits and was a riveting and expressive storyteller. He recorded his story for his family and the printed account of the plane collision and his capture by German forces, were printed in “Hell’s Angels: The True Story of the 303rd Bomb Group in World War II, by Jay A. Stout. The 9 members of the 427th Bomb Squad crew remained lifelong friends and Ed, along with his wife Sue, thoroughly enjoyed traveling the country and being reunited with one another at their reunions. Following his service to our country, Ed worked as a Senior Service Representative for IBM prior to his retirement in 1983 after 35 years with the company. Ed built his beloved cabin near Interlochen in 1965 and after summering there for many years, moved there permanently in December 1994. Ed married Susan K. MacDougall on July 11, 1997. Ed was a member of St. Patrick Catholic Church, and was a member of the Air Force Association, the 303 Bomb Group Association and was an active member of the Green Lake and Betsie River Association. Surviving Ed is his wife, Susan of Jackson as well as 5 nieces, and 4 nephews. He was preceded in death by his parents, his sisters Mary Therese Wallace and Mary Frances and a brother William. The Mass of Christian Burial will be celebrated at 11 a.m. Saturday, October 6, 2018 at St. Patrick Catholic Church, with visitation beginning at 10:00 A.M. Father Greg McCullum and Deacon Rene Hoenscheid will celebrate the mass. Inurnment will take place at the Oakwood Catholic Diocesan Columbarium following a luncheon at the church. Memorial contributions may be directed to: The Road Home Program athttps://roadhomeprogram.org/. Please share your memories of Ed with his family by visiting his online guest book atwww.reynolds-jonkhoff.com The family is being cared for by Reynolds-Jonkhoff Funeral Home and Cremation Services.

The family of Edward W. Gardner Jr. created this Life Tributes page to make it easy to share your memories.