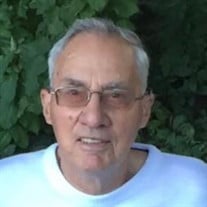 With profound sadness the family of Edward Alexander Hall announces his passing during the early morning hours of May 18, 2021. He is greatly missed. Born March 16, 1933 to Harold and Minnie (Mannor) Hall, the second of five children with siblings Evelyn (Robert) Summers; Walter G. Hall; Marion (Michael) Vaughn; and Helen Hall. Ed grew up on the family farm in Long Lake Township. As a child and young man Ed enjoyed the outdoors, catching pigeons as a boy, hunting and fishing as he grew older. Ed graduated from Traverse City Central High School in 1952. Shortly thereafter he enlisted in the United States Air Force. Ed served his country for four years, leaving the service as a Staff Sergeant. Ed was selected for and trained in the then relatively new field of computer programming. He was stationed at Stewart Field in Newburgh, New York and, for his last year of service, in Japan. Returning home after discharge Ed moved to the East Coast to find work as a computer programmer. He was employed by Gulf Oil, Philco, and Downs Carpet Company. While working in Philadelphia he met his future wife, Jo Healey. The two were married at Queen Of Peace Catholic Church in Ardsley, Pennsylvania on September 7, 1963. They had four children, Michael (Ruth) Hall; Susan (William) Gaston; Maureen (Todd) Knipe; and Jennifer (Patrick) Bard. In 1978, Ed moved the family back to his hometown, Traverse City. He (helped by his father Harold) built a house on the farm between two large pine trees, a site Ed had chosen many years before. Ed raised his family and remained in this home until his passing. In Traverse City Ed worked as a computer programmer for Grand Traverse County, and then as data processing supervisor for Cherryland Electric. He retired from Cherryland in 1998. Ed devoted his life to his family. He taught and lived the values of hard work and dedication to loved ones. He showed this through the many projects of family members to which he unselfishly volunteered his time, including the building of many of their homes. Loved and appreciated by all who knew him, Ed held the respect of his family, coworkers and neighbors. Despite a cognitive decline in his last years, his impish sense of humor was always present and a delight to those who knew him. Ed was an avid and successful bowler, participating in league play for many years at Timber Lanes and Wildwood Lanes in Traverse City. Always keen to accept a challenge, whether related to work or games, Ed never evinced an air of arrogance or superiority. Ed was preceded in death by his parents, brother Walter, sisters Marion and Helen, and grandchildren Tristan Knipe, Taylor Knipe and Austin Knipe. He is survived by his wife, Jo Anna Hall; his children and their spouses; sister Evelyn (Robert) Summers; sister-in-law Mary E. Healey; grandchildren Kevin Gaston, Steven Gaston, Aidan Knipe and Ashton Knipe; and several cherished cousins, nieces and nephews. The family would like to extend their gratitude to the thoughtful staff of the Grand Traverse Commission on Aging. Heartfelt thanks are also offered to the caring personnel of Munson Hospice and the Munson Hospice House, who provided compassionate and dignified care to Ed and his family in his final days. Visitation will be held from 5-7 p.m. on Thursday, May 27, 2021 at Reynolds-Jonkhoff Funeral Home in Traverse City. Mass of Christian Burial will be conducted at St. Francis Catholic Church on Friday, May 28, 2021 at 11:00 a.m., followed by military honors and interment at Grand Traverse Memorial Gardens. Memorial contributions can be directed in Ed’s name to the Grand Traverse Commission on Aging and the Munson Hospice House. You may share memories or condolences at www.reynolds-jonkhoff.com

With profound sadness the family of Edward Alexander Hall announces his passing during the early morning hours of May 18, 2021. He is greatly missed. Born March 16, 1933 to Harold and Minnie (Mannor) Hall, the second of five children with siblings... View Obituary & Service Information

The family of Edward Alexander Hall created this Life Tributes page to make it easy to share your memories.

With profound sadness the family of Edward Alexander Hall announces...