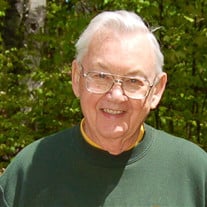 Edward Marion Havitz Life is paradox: often beautiful, then sometimes heartbreaking; generously blessed, then seemingly cursed; wind blowing gently at your back, then howling in your face. Ed Havitz was blessed with more of the former than the latter. On September 5, 2014, Ed’s body was transported from a long term care facility nestled on infill property in one of the world’s magnificent parks, Sleeping Bear Dunes National Lakeshore, to serve one final time, this for medical research purposes at Michigan State University. From there his cremated remains will eventually be returned, reunited with those of his life partners, and spread on public land. Ed Havitz lived an incredible life. He fought under Douglas MacArthur, voted for Ike and JFK, danced to Louis Armstrong, marched with Martin Luther King Jr., plotted political strategy with George McGovern, walked with Millard and Linda Fuller, built homes with Jimmy and Rosalynn Carter, comforted and counselled people on society’s and community’s margins, lost an infant son and two beloved wives too soon, and cheered in solidarity with his daughters when Billie Jean King beat Bobby Riggs. Generous with his time and money, Ed sought “to give personal things to the people I love” and “material things to people who really need them.” Ed Havitz died peacefully September 4, 2014 in loving care at Lakeview Estate near Maple City MI. Born to Alma Albertine (Buelow) and Edward John Havitz in Marshfield WI on May 17, 1930. Ed was predeceased by his parents, two beloved wives Carol (Keefer) Havitz in 1982 and Pamela Fulton in 2009, a son (William John), sister Rosemary (Virgil) Seavers and brother John (Elaine). He is survived by two brothers Elliott (Katie) of Wisconsin Rapids WI and Lloyd of Amherst WI; six children, Mark (Sue) of Kitchener ON Canada, Lynn (Doug) Hansen of Lake Leelanau, Kari Brandon of Holt, Sue Nguyen of Holt, Jimmy (Morgan) Morgan of Lansing and Faith Fulton of Northport; five stepchildren Anna (Robert) Messner of Palo Alto CA, A.A. (Cindy) Hopeman of Arlington MA, Sue (Dee) Davidson of Dallas TX, Leslie (Jeffrey) Sheats of Niwot CO, Bob (Christy) Hopeman of El Cerrito CA; and 19 grandchildren. Ed cherished family. Responding over a decade ago to the question, “List what you’d do if you had only a few weeks left to live” the first two among Ed’s seven entries were: “1) Arrange to hug and hold each of my children and grandchildren, including Pam’s family, and tell them how valuable they were to me; and 2) Thank God for two wonderful wives, each day.” Raised on a Junction City WI dairy farm, Ed graduated from Central State Teachers’ College (now Wisconsin-Stevens Point) and later earned a Master’s degree from the University of Wisconsin-Madison. His Bronze Star service as platoon commander in a racially diverse 86th Searchlight Company during the Korean War impacted Ed’s views on social justice. Returning home, Ed taught social studies for 35 years, first in Hannibal WI, then Escanaba MI and finally Lansing MI. Ed was a basketball coach, assistant principal, and advisor of the Black Students club, Ecology club and Student Council. Summertime he worked jobs ranging from police officer in Escanaba to construction inspector and recreation coordinator in Lansing. During the 1960s Ed chaired the Michigan Education Association’s Human Relations Commission; he trained to mediate civil unrest contexts and was a vigorous advocate for hiring minority teachers. In the 1970s and 1980s, as an Eaton County Commissioner he championed farmland preservation and park development, proudly and harmoniously working, at times as the lone Democrat, on an otherwise all-Republican board. Upon retirement from the Waverly School system in 1988, heavily influenced by favorite Biblical passages in the Book of James, Ed turned his avocational endeavor full-time to people on society’s margins. His varied interests included volunteering at Lansing’s Advent House ministry, organizing Church World Service CROP Hunger Walks in several communities for multiple years, presiding over Lansing Habitat for Humanity’s Board during some formative years and, after moving back to the Upper Peninsula, co-founding (with Pam) Hiawathaland Habitat for Humanity in Manistique. He worked on over 50 Habitat builds, including service as principal fund raiser for at least half. A large portion of Ed’s philanthropic work, as well as six trips to Mississippi and Louisiana on Hurricane Katrina relief teams, occurred after graceful acceptance of his 1997 Alzheimer’s diagnosis. Ed was a lifetime member of the NAACP, member of Disabled American Veterans, and an active member of five Presbyterian churches over his adult life, serving in numerous capacities from Sunday school teacher to Elder. Honoring his life’s work, two Habitat for Humanity homes were funded and built in Waterloo ON Canada in 2000 by a 120-member army of family and friends. Ed was MEA Regional Teacher of the Year, Manistique Folk Hero, Michigan Habitat Volunteer of the Year, and Finalist for the Michigan Governor's Lifetime Achievement Award for Volunteerism. His memorial service and luncheon will be held next month at Suttons Bay Congregational, last of Ed’s church homes, on Saturday, October 11 at 11:00 a.m. Ed’s family requests that charitable donations in his memory be made to Hiawathaland Habitat for Humanity http://www.hiawathalandhabitat.com/ or to an organization of the giver’s choice.

Edward Marion Havitz Life is paradox: often beautiful, then sometimes heartbreaking; generously blessed, then seemingly cursed; wind blowing gently at your back, then howling in your face. Ed Havitz was blessed with more of the former than... View Obituary & Service Information

The family of Edward Marion Havitz created this Life Tributes page to make it easy to share your memories.