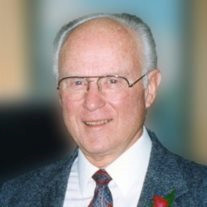 Edward J. Karmann, 88 of Traverse City Michigan passed away March 2, 2014 at Cherry Hill Haven in Traverse City. Ed was born March 3, 1925, in Dearborn Michigan, the son of Edward and Eleanor Karmann. Ed graduated from Dearborn High School in 1943 In 1944, he enlisted in the Army Air Corps Officer school, and graduated with a commission as a 1st Lieutenant. Ed trained for single engine fighter planes, including the P 51 Mustang. After WW2, Ed remained in the Air Force Reserves for several years, and attended Syracuse and Michigan State Universities. In 1955, Ed married Bette Lynch from Wayne Michigan, settled in Lansing Mi, and raised a family. He was a District manager for Shell Oil Co. for several years. In 1961, Ed became a Insurance Agent for State Farm Insurance Co, and retired in 1994. He was active in Kiwanis for a number of years. Ed's favorite past times included spending time at their cottage at Glen Lake, with his family, and fishing when ever he had the chance. After his retirement from State Farm, he spent 10 years travelling to Alaska every summer in his motorhome. He also enjoyed golfing with his long time friend, Henry Bot. Ed is survived by his son Ed Karmann and wife Linda of Alanson Mi, and his Daughter Mary Barrett, and Husband Paul of Traverse City Mi. Funeral services for Ed will be held 2:30 PM Thursday, March 6 at Reynolds-Jonkhoff Funeral Home in Traverse City., with visitation beginning at 1:30 p.m. A luncheon will immediately follow the services. In lieu of flowers, memorial contributions may be made to the Alzheimers Association, 921 W. 11th St, Suite 1W, Traverse City, MI 49684 Please share memories with the family by way of Ed's online guest book at www.reynolds-jonkhoff.com. The family is being served by Reynolds-Jonkhoff Funeral Home and Cremation Services.

The family of Edward Joseph Karmann created this Life Tributes page to make it easy to share your memories.