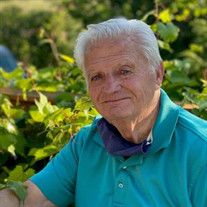 A world renown icon in the wine industry, yet a gentle giant to his family, Edward Leo O'Keefe, Jr, 89, of Traverse City, passed away peacefully at his home on January 1, 2021, surrounded by his family and the vineyards he loved. Born June 4, 1931 in Philadelphia, PA, Ed was the son of Marie (McNiel) and Edward Leo O'Keefe, Sr. Ed lettered in every sport, excelling in diving while at John Bartram Senior High. He continued his education at West Chester University, earning his Bachelor’s Degree. Ed excelled at athletics while at college, especially as a gymnast, earning a spot on the National Gymnastics Team and made the first cut in the 1952 US Olympics. He also enjoyed downhill skiing. He enlisted in the military and served as Captain in the Airborne Special Forces in Europe, remaining a Reserve Officer until the late '80s. Ed was one of only three people (at the time) in US history to receive a perfect score on his Army fitness test. Known for his entrepreneurial spirit, and after having opened and operated a string of extended-care health nursing homes in the Midwest for a number of years, Ed left his work there in 1974 to move to Acme to open the first vineyard and winery in Northern Michigan. He became well known for his expertise, not only here, but worldwide. Even though many thought him crazy for attempting this wine endeavor in Northern Michigan, they didn't know Ed O'Keefe and he set out to prove them wrong when he established a vineyard on his 55 acres, thus bringing the wine industry to life here. Ever the anonymous do-gooder, he exemplified the term generous by the many contributions he made to this area. He often said his greatest accomplishment however, was winning the Danny Boy singing competition at Dill's on St. Patrick's Day, which was a tribute to his Irish heritage which he was so proud of. Ed is survived by his children, Maria O'Keefe of Kansas City, MO, Laurie (Jeff) Brunette or Orcas Island, WA, Colleen Safir of Bradenton, FL, Eddie (Allison) O'Keefe, III, and Sean (Stacey) O'Keefe, all of Traverse City; his grandchildren, Gary and Rory Safir, Kate and Nicky O'Keefe and Molly and Fionn O'Keefe. Ed is also survived by his former wife Sharon O'Keefe of Holmes Beach, FL. Preceding Ed in death was his son in law Gene Safir and his brothers Paul and Robert Bortell. The Celebration of Ed's life take place via life stream on Saturday, January 9, 2021 beginning at 1:00 P.M. To participate in the service, please log in to www.rjfh.tv and then click on Ed’s photo. You will then be connected to the live stream. In person attendance will not be available. For those who desire to remember Ed through a memorial contribution, the family would suggest Munson Hospice c/o Munson Healthcare Foundations, 1500 Medical Campus Drive, Traverse City, MI 49684. (www.munsonhealthcare.org) or The Cherryland Humane Society, 1750 Ahlberg Rd., Traverse City, MI 49696 (www.cherrylandhumane.org).

A world renown icon in the wine industry, yet a gentle giant to his family, Edward Leo O'Keefe, Jr, 89, of Traverse City, passed away peacefully at his home on January 1, 2021, surrounded by his family and the vineyards he loved. Born June... View Obituary & Service Information

The family of Edward Leo O'Keefe Jr. created this Life Tributes page to make it easy to share your memories.

A world renown icon in the wine industry, yet a gentle giant...