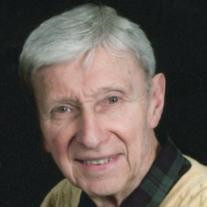 Traverse City-Edward Joseph Podworski, of Traverse City, Michigan died August 28th at home surrounded by his loving family after a long struggle with Parkinson’s Disease. Edward was born January 22, 1928 in Chicago, Illinois, the only son of Stanley and Victoria (Zmita) Podworski. His parents immigrated from Krakow, Poland and became US citizens in 1920. At three years of age Ed and his family moved to Berrien Springs, Michigan where his parents owned and operated a summer resort on Lake Michigan. Upon graduation from high school, Edward spent 8 years including reserves in the Army division of the US military as a medical first class sergeant. He was honorably discharged and attended Ferris State School of Pharmacy in 1959. He was licensed in Michigan and Indiana where he owned and operated drugstores in South Bend, IN, Lawton, MI, Niles, MI, and Three Oaks, MI. He had the unique ability to open a drugstore where there previously was none and make it successful. His customers respected and loved him for his conscientious service. He spent several years of his pharmacy career in hospital administration, serving as the Hospital Administrator of Lee Memorial Hospital in Dowagiac, MI, while simultaneously overseeing the Department of Pharmacy as their Director. He presided as Rotary Chair while serving the hospital board in Dowagiac. At Mercy Hospital in Benton Harbor, MI, he met the love of his life, Margaret Rizzardi, who at the time was the assistant director of pharmacy. On July 21, 1978, they were united in marriage at St. Joseph’s Catholic Church in St Joseph, MI. In 1981, his only child, Carlotta Marie was born. She was the light in his life and was devoted to her Dad throughout his struggles with this debilitating disease. In 1987, his family relocated to Traverse City where he organized and managed Acme Pharmacy for the TC Osteopathic Hospital. Ed retired after 35 years in pharmacy. Ed “attempted” many hobbies in his lifetime in addition to his professional career. He was an accomplished drummer, entertaining in many Elks clubs throughout Michigan in a 3-piece band. He loved dancing the polka with Margaret, following the stock market, and spending time at the lake with his family and friends. Edward is survived by his wife of 34 years Margaret Rizzardi Podworski, his loving daughter Carlotta, devoted son-in-law David Korson, and his one and only precious grandson Vincent Edward Korson. A special thanks is extended to June Hansen, Heidi McQuistion, and Rene Hoenscheid whose loving compassion saw Ed through many days of struggle. A Funeral Mass will be will be held at St Francis Catholic Church on Friday, August 31, 2012 at 11:00 A.M., with visitation on hour prior to the service. Rev. Polycarp Mblarawa and Deacon Rene Hoenscheid will con-celebrate. His body will be laid to rest at Grand Traverse Memorial Gardens with full Military Honors under the auspices of the Cherryland Post #2780. In lieu of flowers, memorial contributions can be sent to St Francis Church Health Ministry. Remembrance masses can also be said on Edward’s behalf. Kindly share your memories with the family on their online guestbook at www.reynolds-jonkhoff.com The family is being served by the Reynolds-Jonkhoff Funeral Home

The family of Edward Joseph Podworski created this Life Tributes page to make it easy to share your memories.