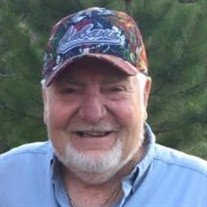 Edward Charles Van Leishout, 88, of Traverse City, Michigan passed away after a brief illness on Saturday, September 19, 2020 at Munson Medical Center. Affectionately known as Eddie by his family and relatives. He was born on January 8, 1932 in Traverse City to the late Edward and Frances (Svec) Van Leishout. He was married to Betty Nell Hood on July 3, 1953 at Central United Methodist Church. She preceded him in death on May 12, 1993. Eddie grew up on North Cedar Street and graduated from Traverse City High School in 1950. He proudly served his country in the U.S. Army during the Korean War. Eddie had been employed with Cone Drive as a tool maker and machine rebuilder, retiring after 36 years of service. He was a member American Legion post 35 and Alcoholics Anonymous. With AA he was on call and over the years he helped countless people through difficult times. Eddie was very proud of his 45 years of sobriety. He was a charter member of UAW Local 21, he also served as Skilled Trade’s Representative with 1D UAW as well as a past Vice President for the Michigan Bear Hunter’s Association. Eddie loved the outdoors, hunting, camping, hiking, searching for mushrooms and fishing. His passion for fishing started at a very young age, from living so close to West Bay. Eddie’s love for nature led him to play an instrumental role in the saving of the Pigeon River State Forest. He enjoyed traveling. When younger he attended the Cedar Polka Dance Festival as he enjoyed the music and dancing. Eddie is survived by his two sisters; Marianne Klepetka and Cathy Bolter. Nieces and nephews; John (Merilee Shipman) Klepetka, Robert (Jodie) Klepetka, Susan (David) Heydlauff, Janet (Mike) Teel, Brianna (Doug) Bolter and Heather (Bryan) McNulty. As well as a very special companion, Joanna Dakoske. He was preceded in death by his wife, parents and a brother-in-law; Adolph Klepetka. A memorial service honoring Edward will take place at 11:00 a.m., with visitation one hour prior, on Saturday, October 24, 2020 at Grace Episcopal Church, 341 Washington Street, Traverse City, Michigan 49684. Rev. Fr. Chris Bishop will officiate. A private burial of Eddie’s cremated remains is planned Those planning an expression of sympathy may wish to consider a memorial donation to Alcoholics Anonymous or Grace Episcopal Church. Please feel free to share your thoughts and memories with Eddie’s family at his tribute page at www.reynolds-jonkhoff.com. The family is being cared for by the Reynolds-Jonkhoff Funeral Home and Cremation Services.

Edward Charles Van Leishout, 88, of Traverse City, Michigan passed away after a brief illness on Saturday, September 19, 2020 at Munson Medical Center. Affectionately known as Eddie by his family and relatives. He was born on January 8, 1932... View Obituary & Service Information

The family of Edward Charles Van Leishout created this Life Tributes page to make it easy to share your memories.