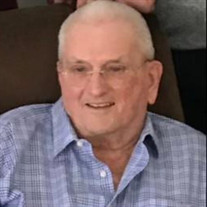 Mr. Edward John Zientek of Traverse City, Michigan, formerly of Maple City, age 82, passed away on the evening of Tuesday, November 11, 2021, and rests now in the arms of his Lord and Savior. Ed was born to Frank and Agnes (Watkoski) Zientek on March 29, 1939, in Maple City and was a lifelong resident of the area. On April 5, 1959, Ed married the love of his life, Lorraine Olsen at St. Rita’s Catholic Church. A few years after, Ed was drafted into the United States Army, proudly serving his flag and country. In 1978, Ed and his good friend Jerome Bufka started the B&Z Well Drilling Company in Maple City, which he owned and operated until his retirement in 2000. When time allowed, Ed really enjoyed woodworking in his shop, hunting, and smoking meat. He loved bringing his famous, homemade jerky to share at deer camp. Ed was a man of great faith. He and Lorraine were longtime members of St. Rita and Joseph’s Catholic Church and was a dedicated member of the Knights of Columbus. Ed is survived by his wife of 62 years, Lorraine (Olsen); loving children Mark (Pam) Zientek, Jan (David) Wollet, and John (Krista) Zientek; grandchildren Brandon (Sami), Nathan (Mariah), Kyle (Frances), Samuel, Benjamin, Marli, Bradley, and Joshua; great-grandchildren Willow and Antonio; sisters Betty (Larry) Stachnik and Shirley Lawson; brother Don (Darlene) Zientek; many friends and other beloved members of the family. He was preceded in death by his parents; infant son Paul; and brother Robert Zientek. Relatives and friends may call on the family during a time of visitation from 4:00 until 7:00 p.m. on Tuesday, November 16, 2021, at Reynolds-Jonkhoff Funeral Home, 305 Sixth Street, Traverse City, MI 49684. A Praying of the Rosary will be read at 7:00 p.m. A Mass of Christian Burial will be celebrated by Fr. Ken Stachnik at 11:00 a.m. on Wednesday, November 17, 2021, at St. Rita and Joseph’s Catholic Church, 8707 Hill Street, Maple City, MI 49664. Those wishing to offer an expression of sympathy are encouraged to make a memorial contribution to the Cedar Area Fire & Rescue, 8907 S. Railroad Avenue, Cedar, MI 49621.

Mr. Edward John Zientek of Traverse City, Michigan, formerly of Maple City, age 82, passed away on the evening of Tuesday, November 11, 2021, and rests now in the arms of his Lord and Savior. Ed was born to Frank and Agnes (Watkoski) Zientek... View Obituary & Service Information

The family of Edward John Zientek created this Life Tributes page to make it easy to share your memories.