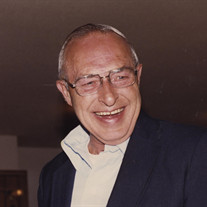 Edwin K. Bishop, 90 of Acme, passed away in his home on January 26, 2020, under the loving care of his surviving family. Ed was born on February 6, 1929 in Detroit, MI to Florian and Hazel (Small) Bishop. He moved to Traverse City in 1939, where he worked around automobiles throughout his entire adult life. Having initially retired from Joynt’s Automotive in 1991, Ed quickly discovered that full retirement did not suit him. He was soon happily employed with Thirlby Automotive, where he continued to work until shortly after his 90th birthday. On May 2, 1953, Ed took Virginia “Ginny” (Oberlin) Bishop as his wife, at Trinity Lutheran Church in Traverse City, where they were active life-long members. The two remained passionately in love with each other; and they were married nearly 60 years before Ginny’s passing on March 24, 2012. Throughout their lives, Ed and Virginia traveled the world together; and their home was frequently a welcome destination for close friends and family from all over the United States. Ed is survived by his children; Cheryl (Doug) Weathers, Traverse City, Nancy (Robert) Conklin, Williamsburg, Sandra Wright, Traverse City, Randy Bishop, Traverse City, grandchildren; Kelly (Cory) Carlton, Traverse City, Kristofer Weathers, Traverse City, Robert (Amanda) Conklin III, Charlevoix, Theodore (Kristy) Conklin, Elk City, OK, and sister Dorothy Johnson, San Antonio, TX, great-grandchildren; Kylie and Corbin Carlton, Aiden Weathers, Adelaide and Colton Conklin, and Preston, Tanner, and Easton Conklin. Ed is also survived by his loving friend and companion, Helen Gustavson. Ed was preceded in death by his parents, his wife, Virginia, his in-laws, Wilbert and Esther Oberlin, his brother, Walter Bishop, his sister, Grace Wilson, grandson Jeffrey Conklin and his son-in-law, Tim Wright. Funeral services for Ed will take place at 11:00 am on Monday, February 3, 2020 at Reynolds-Jonkhoff Funeral Home, with visitation one hour prior to the service. Pastor Dan Dockery will officiate. Ed will be laid to rest next to his wife Virginia in the spring of 2020. Memorial contributions in Ed’s memory may be directed to, Trinity Lutheran Church, 1003 S Maple St, Traverse City, or Munson Hospice, 1150 Medical Campus Dr, Traverse City, MI 49684, or the charity of your choice. Please share a memory with Ed’s family by visiting his tribute page at www.reynolds-jonkhoff.com. The Reynolds-Jonkhoff Funeral Home and Cremation Services is serving the family.

Edwin K. Bishop, 90 of Acme, passed away in his home on January 26, 2020, under the loving care of his surviving family. Ed was born on February 6, 1929 in Detroit, MI to Florian and Hazel (Small) Bishop. He moved to Traverse City in 1939, where... View Obituary & Service Information

The family of Edwin Bishop created this Life Tributes page to make it easy to share your memories.