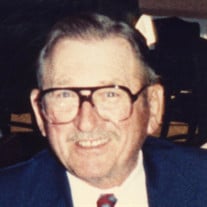 Edwin Delos Merritt, 99, of Traverse City, passed away on Dec. 4, 2014. Edwin was born on April 17, 1915 in Detroit, to his parents the late Herbert Danie and Matilda (Anderson) Seaberg Merritt. He honorably served our country in the Army Battery C 602nd AA Gun Battalion serving four tours of duty including Normandy and the Battle of the Bulge. He married the late Olga Madzelan, in 1942 and married RoseMary (Kropp) Foust in 1972. Edwin worked for Crandall Service for 12 years and later for Cone Drive Gear for 23 years, where he was a union steward for Local 21. During this time, he built several homes and cottages in Brakel Point on Silver Lake. After retiring in May of 1973 he enjoyed traveling the country, eventually spending winters in Mesa, AZ. He is survived by his wife RoseMary; son, William Edwin Merritt of Traverse City and Euless, TX.; step-son, Larry (Margaret) Foust, and their two sons, Matt and Jeff, of Atlanta, GA.; grandchildren, Meghan (Curtis) Rosenstengel and Michele (Richard) Burman, Genevieve (Sanjay) Parikh, Robert Alan Merritt; and 14 great grandchildren. He is preceded in death by his first wife; sisters, Violet, Edna Doris, Clarabell Merritt, Genevieve (John) Chambers; brother, Herbert; son, Robert D. Merritt. A funeral service will be held at 11:00am on Tuesday, Dec. 9, 2014 at the Reynolds-Jonkhoff Funeral Home, with visitation one hour prior. Burial will take place at the Soper Cemetery in Mesick. The family would like to thank the staff of Cherry Hill Haven and Hospice of Michigan for their excellent care of Ed in his final days. Memorial Donations may be to the VFW Cherryland Post #2780 3400 Veterans Dr. Traverse City, MI. 49684. Kindly share your memories with Edwin's family by way of his online guest book at www.reynolds-jonkhoff.com Arrangements for the family have been entrusted to Reynolds-Jonkhoff Funeral Home and Cremation Services.

Edwin Delos Merritt, 99, of Traverse City, passed away on Dec. 4, 2014. Edwin was born on April 17, 1915 in Detroit, to his parents the late Herbert Danie and Matilda (Anderson) Seaberg Merritt. He honorably served our country in the Army... View Obituary & Service Information

The family of Edwin Delos Merritt created this Life Tributes page to make it easy to share your memories.

Edwin Delos Merritt, 99, of Traverse City, passed away on Dec....