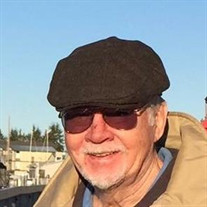 Lake Ann - Edwin J. Stevens, 84, passed away Thursday, May 3, 2018 peacefully at his home surrounded by his loving family. Ed was born August 6, 1933 in Traverse City, MI. In 1951 he graduated from Northport Township High School. From 1951 - 1959 he served for the United States Marine Corps, Fifth Battalion, Platoon 596, achieving the rank of Corporal E4 during the Korean War. From 1956 - 1994 Ed was employed with Michigan Bell Telephone Company. He lived on Silver Lake for 20 years. In 1976, he married Carol L. (Wilcox) and moved to Lake Ann, Michigan. All seasons were enjoyable to Ed. He made memories with his family and friends, participating in slow pitch softball and bowling leagues, boating, waterskiing, snowmobiling, hunting, fishing, as well as two-tracking. He was a long time member of the Eagles, Elks, and Cedar Hilltopper's Snowmobile Clubs. Ed was preceded in death by his wife, Carol L. Stevens of 39 years, his mother Vera (Wilson) Stevens, and his parents, Joseph and Alice (Swanson) Stevens and his sister Joann (Stevens) Wheeler. Ed is survived by his children Cynthia Stevens (Kevin) Monohan and Michael (Annette) Stevens of Washington, Julie Stevens (Les) Thompson of Arizona and stepchildren Brian (Kathleen) Killingbeck and Renee (Shane Roy) Ingleright, brothers Al (Berta) Stevens and Jim (Judy) Stevens. He had 12 grandchildren and 9 great grandchildren. A memorial gathering in his honor will be held on Friday, May 11, from 4 - 6 p.m. at the Hayloft Inn on East Traverse Highway. A private graveside memorial will be held at a later date. Memorial donations can be made to NoMi Leatherneck (Facebook) or Benzie Senior Resources.

Lake Ann - Edwin J. Stevens, 84, passed away Thursday, May 3, 2018 peacefully at his home surrounded by his loving family. Ed was born August 6, 1933 in Traverse City, MI. In 1951 he graduated from Northport Township High School. From 1951... View Obituary & Service Information

The family of Edwin J Stevens created this Life Tributes page to make it easy to share your memories.