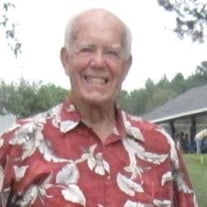 Eldon Dale Schwartz, 83, of Traverse City, died Thursday, February 19, at Culver Meadows Adult Foster Care Home, after an extended illness. Dale was born March 27, 1931 in Hemlock, Michigan to Eldie C. and Gladys M. (Day) Schwartz. He grew up on his parents’ farms and graduated from Remus High School where he met his future wife, Donna Lough. After High School Dale worked for Dow Chemical and toured America with the Dow Male Chorus. When the Michigan Department of Conservation (DNR) advertised job openings, Dale found his true calling, and moved to Fremont as a Fire Officer and eventually a Conservation Officer. He devoted his career to protecting Michigan’s wildlife and natural treasures and upholding its laws for over 35 years in Newaygo, Presque Isle, and Grand Traverse Counties. In 1973 he received the Officer of the Year Award from the Shikar Safari club International. His last post was as Area Law Supervisor in Grand Rapids. Dale is survived by the love of his life, Donna Mae (Lough) Schwartz, his wife of 64 years; his daughter Cindy (Steve) Brant of Manistee, sons Tim (Gail) Schwartz and Tad Schwartz of Traverse City; twelve grandchildren, and 32 great grandchildren, all of whom he inspired with his love of God and His creation. He is also survived by his sister, Betty (Bob) LaLonde of Jackson, Wyoming, and many brothers- and sisters-in-law, nieces and nephews. He was preceded in death by his parents, one brother, four sisters, beloved son Tom Dale Schwartz, and grandson Tsgt Matthew S. Schwartz. A memorial service will be held at 2:00 P.M. on Sunday, February 22, at the Traverse City Church of Christ on Rennie Street. The family has requested that gifts in Dale’s memory be sent to Mountain States Children’s Home, 14780 North 107th Street, Longmont, Colorado 80504.

The family of Eldon Dale Schwartz created this Life Tributes page to make it easy to share your memories.