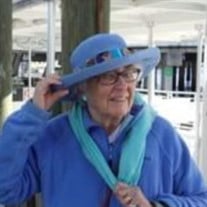 Eleanor A. Golden, noted northern Michigan landscape painter and artist, died August 9, 2021. She was 97. Ellie, as she was known, was a virtuoso in many media, who produced lithographs, etchings, silk screens, oil paintings and watercolors. She was a partner in several galleries in Fort Wayne, IN and northern Michigan and taught at the Fort Wayne Art School. Ellie employed her design skills in quilt-making, sewing, embroidery and knitting. She also formed a plein air painting group in Leland, MI, which traveled around the Leelanau Peninsula to paint on site. Ellie had a retrospective of her work at the Old Art Building, Leland, in 2015. She was born on September 28, 1923 in Indianapolis, IN to Frederick G. Appel and Mary Carey Appel. She attended and graduated from Principia School in St. Louis, MO, later attending Vassar College, Poughkeepsie, NY from 1941-1943. She earned her BFA from St. Francis College, Fort Wayne, in 1975. Ellie married Samuel A. Rea in 1943. They had three children; Samuel, Barbara and Polly. They divorced in 1962. In 1965, she married Edward J. Golden. After his death, she married Benjamin Hitz in 1996. She was preceded in death by her parents, brothers Jack Appel and Allan Appel; husbands Ed Golden and Ben Hitz; son Samuel A. Rea and daughter Barbara Rea Pearson. She is survived by daughter Polly Rea; step children Beth (Aubrey) Raymond, Ann (David) McCann, Charles (Susan) Golden and Catherine Golden. Also surviving are 12 grandchildren, 12 great grandchildren and many nieces and nephews. Burial in Beechwood Cemetery, Leland, MI, will be private. Memorial contributions can be made to the Leelanau Conservancy, the Father Fred Foundation, and the Leelanau Community Cultural Center. The family would like to thank Theresa Mulcahey, Ellie’s companion and friend for her support. We would also like to thank Kristie Dugan, Meghan Daigh, Ruth Sleder, Hospice of Michigan and French Manor Terra for their help in Ellie’s final days.

Eleanor A. Golden, noted northern Michigan landscape painter and artist, died August 9, 2021. She was 97. Ellie, as she was known, was a virtuoso in many media, who produced lithographs, etchings, silk screens, oil paintings and watercolors.... View Obituary & Service Information

The family of Eleanor A. Golden created this Life Tributes page to make it easy to share your memories.