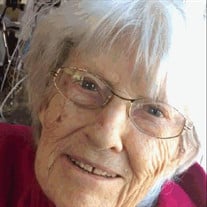 Eleithia May (Spicer) Bondy passed away peacefully in her sleep May 2, 2017. Born on a cold winter day, December 12, 1920 to Lottie and George Spicer in Byron, Michigan. Elieithia was one of three, born to the family that day. With only Eleithia and Leanord surving to be raised with the other nine siblings; John, Cecil, Nova, Leo, Marge, Ernie, Stewart and Joyce, on the modest 180-acre farm. She was the last of the siblings to pass on. Nicknamed Lee, at an early age; she will be remembered by family and friends for her giving nature and spontaneous enthusiasm for life. Lee's early years were spent on her family's farm, one of the largest and best known in the region. Always willing to help neighbors, the Spicers were known for their big hearts and helpful ways. Lee carried that spirit throughout her life. Her strong bonds with family and friends along with music, laughter and dance sustained their spirits throughout the hard times of the depression and WWII. Eleithia and Ottwin (Ott) Bondy married shortly after WWII ended in January 1944. Together they raised four children, first were twins Rachelle and Richard, Mark and then Tami. Ott died Oct. 4th, 1997. Richard, a Vietnam Veteran, died of cancer in 2005. Lee is survived by Richard’s son; Jeff Bondy, daughter Rachelle Babcock, her son Brook, and daughter Marcie, and great granddaughter Alex. Son Mark Bondy and his son Dillon, and Lee's youngest daughter, Tami Bondy. In later years Ott and Lee traveled across the world but Lee's favorite memories were always those closest to home, with the family and friends she knew best. She will be greatly missed. Her memorial service will be held in June at the family plot in Greenwood Cemetery in Vernon, Michigan. Please consider sharing your memories and condolences with the family on Lee’s tribute page at www.reynolds-jonkhoff.com. The family is being cared for by the Reynolds Jonkhoff Funeral Home and Cremation Services.

Eleithia May (Spicer) Bondy passed away peacefully in her sleep May 2, 2017. Born on a cold winter day, December 12, 1920 to Lottie and George Spicer in Byron, Michigan. Elieithia was one of three, born to the family that day. With only Eleithia... View Obituary & Service Information

The family of Eleithia Bondy created this Life Tributes page to make it easy to share your memories.

Eleithia May (Spicer) Bondy passed away peacefully in her sleep...