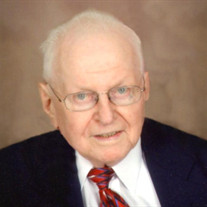 Elgen W. Walt, 90, of Traverse City passed away June 28, 2016 at The Villa at Traverse Point. He was born on May 31, 1926 in Traverse City to the late Wilbur F. and Martha M. (Newstead) Walt. Elgen attended Traverse City Schools and at the age of 17 enlisted in the United States Navy. He served as a radio man second class in WWII in the South Pacific where he was assigned to the Marines. He served in the Battle of Peleliu in the Mariana Islands and at the Battle of Okinawa. After two and a half years he was honorably discharged. He returned home and met the love of his life Dorothy McGill. On September 6, 1947, he and Dorothy were united in Holy Matrimony at Immaculate Conception Catholic Church. Elgen was employed as an assistant nurse at the State Hosptial and also drove bus for TCAPS in the afternoons. He enjoyed gardening and watching the Detroit Tigers. He was a HAM radio operator and used the call sign W8RNQ. Upon retirement he also enjoyed golfing with Dorothy. Faith was important to Elgen. For many years he attended an annual silent retreat in Conway, MI. He sang tenor in the church choir, served as a Eucharistic Minister for over 20 years, and was on the cemetery committee for the diocese. Above all else, Elgen was truly a family man. He was a devoted husband, father, grandfather and great grandfather. He will be greatly missed. Elgen is survived by his wife of 68 years, Dorothy; his children Therese (Thomas) Brinson of Lansing, Tom of Traverse City, Michael (Sharon) of Big Rapids, Cindy (Alan) Robords of Mt. Pleasant, Mary (Bill) Becker of Traverse City, and Daniel (Lara) of Alexandria, VA; 12 grandchildren; 14 great grandchildren and brother Lawrence Walt of Dallas, N.C. Elgen was preceded in death by his parents and brother Alfred Walt. Visitation will be held on Friday, July 1, 2016 from 2 to 4 pm and at 6:30 pm with the Rosary at 7 pm at the Reynolds Jonkhoff Funeral Home. The Mass of Christian Burial will be celebrated on Saturday, July 2, 2016 at 11:00 am with visitation one hour prior at Immaculate Conception Catholic Church. Father James Hayden will be the presider. Graveside services will take place on Wednesday, July 6, 2016 at Oakwood Catholic Cemetery where he will receive full military honors. Memorial contributions in memory of Elgen may be directed to Immaculate Conception Catholic Church or to Mass Intentions. Please visit www.reynolds-jonkhoff.com to share your condolences and memories with the family. The family is being served by Reynolds Jonkhoff Funeral Home.

Elgen W. Walt, 90, of Traverse City passed away June 28, 2016 at The Villa at Traverse Point. He was born on May 31, 1926 in Traverse City to the late Wilbur F. and Martha M. (Newstead) Walt. Elgen attended Traverse City Schools and at... View Obituary & Service Information

The family of Elgen W. Walt created this Life Tributes page to make it easy to share your memories.